My husband and I just returned from an eventful, activity-packed vacation to the South. I have wanted to go to Texas to visit a good friend from high school for several years. I hadn’t set foot in Texas since I was about 16, so I planned a trip around the cities I was most interested in, and on the way back we would take a few days to stop in Memphis. I enjoy planning trips, researching places to see and mapping out the trip, especially when we will travel by car. In this space, I will write about the highlights of the trip.

As you approach the Congress Avenue Bridge, this sculpture marks one of Austin’s most interesting and unusual sites: a colony of Mexican bats who migrate here during the spring and fall, and fly out en masse every evening, in search of food.

Engineers renovated the bridge over Lady Bird Lake in Austin in 1980, creating deep but narrow crevices that turned out to be the perfect daytime hide-out for mostly female, pregnant migratory bats to nest. The bats fly north from Mexico every spring to give birth and return south in the fall. There are between 700,00 and 1.5 million of these bats that nest under Congress Avenue Bridge every year. They consume 10,000-30,000 pounds of insects during their stay in Austin – a great community service in a hot climate where insect populations abound!

At about 8:00, our Austin friends took us out onto Congress Avenue Bridge. I paused about midway across, joining a crowd that gathered for the nightly phenomenon. The others continued to the far end of the bridge.

I didn’t follow immediately because I was busy taking pictures of those who had gathered below. A group of kayakers rowed in single file out into the middle of the river from under the bridge, then clustered together. Boats full of tourists and locals waved and called to those of us on the bridge above. On the far bank, families settled on blankets or lawn chairs as their kids ran around on the grass. Obviously we were all about to witness something incredible. 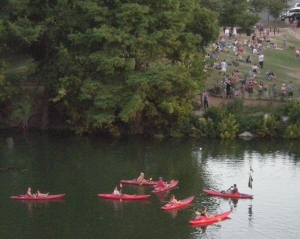 I turned to take a picture of the sun which was setting over the far side of the river.

Dale called me to join them at the far end of the bridge, which I did just in time.

Suddenly we saw them. Swarms of small black bats swooped out from underneath the bridge. I had never seen anything like this – there were thousands, no – millions – of them. They kept coming and coming and formed long, black clouds above the tree tops.  All of them took off toward the east, the opposite direction from the setting sun. From the bridge we had a great view looking downward and upward, but from the perspective of those in boats below, the bats soared right above them, and I imagined the sound of thousands of beating wings overhead, accompanied by high pitched squeaks. 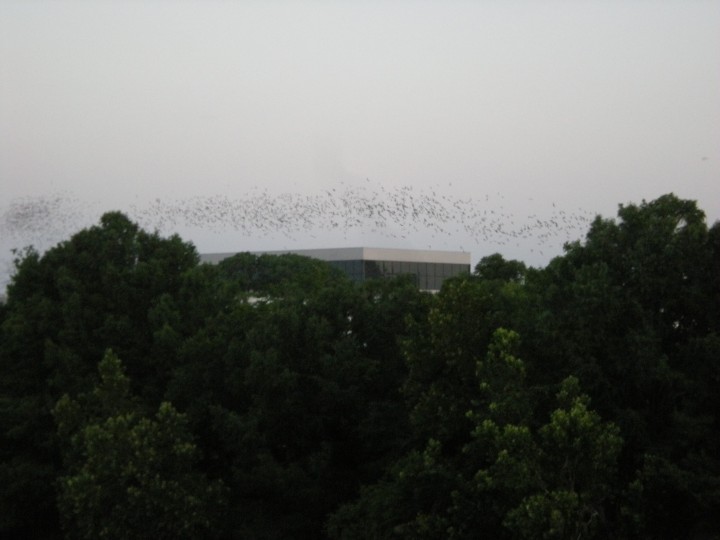 This spectacle amazed me. I imagined, incredulous, how such a multitude of bats could all be living under that bridge, and contemplated the internal clock of these tiny creatures which tells them to leave their nests every day at approximately the same time, all acting in unison and with a singularity of purpose. I have witnessed yet another phenomenon of nature that holds me in awe and leaves me with a peaceful feeling.

“Wow,” I remarked as we observed the bats’ daily mission. “There must be thousands of them!”