Posted on February 2, 2016 by amoralegria

I am pairing two weather-related words from two different places. The first is:

pogonip (noun). According to dictionary.com, it comes from a Shoshone word which refers to an ice fog that forms in the mountain valleys in Western USA. Being a “flatlander” in the Midwest, I of course had never heard of this term. I like the sound of it, though, especially the “nip” – when that fog comes in, the weather is quite nippy! A pogonip will nip at an exposed nose or ear!

The origin of pogonip in the Shoshone language (the Numic language group) is paγɨnappɨh, which means “thunder cloud.” Pogonip became an Americanism – in general use in that region – by 1865. 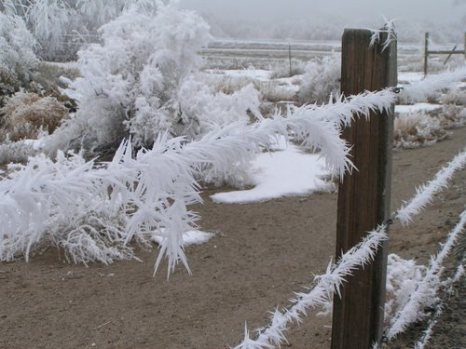 The pictures above show pogonip crystals.

The Shoshone people come from the Pacific Northwest. They may have several words derived from this root – just as the Inuit have many words for snow.

Crossing the Atlantic, another fog-related word comes from  eastern Scotland and Northeastern England.  A thick, white fog that comes onto land from the seacoast is called haar. It usually happens on the east coast of the British Isles between April and September, according to Wikipedia. The warm air comes into contact with the cold North Sea, causing the air to condense and creating the fog, which can spread several miles inland. This causes a substantial drop in temperature.

The web site dictionary.com, dates this word to the late 1600s. It is a variant of the word “hoar.” Perhaps if we close our eyes and listen to what this fog sounds like, it might resemble haar– like a exhalation of air. This is, of course, pure speculation, since I have never seen – or heard – this fog.

The origin of haar may be Low German/Middle Dutch “hare”.

Here’s an especially dramatic picture of the haar: