Posted on December 7, 2016 by amoralegria

The aurora borealis is the result of electrons colliding with Earth’s upper atmosphere. Typically it forms 80-500 km above Earth’s surface. The electrons come from solar flares caused by solar storms, and while we were in Alaska we found out that 2016 is the 11th year of the solar cycle when it is most volatile making storm-causing flares more likely.

The accelerated electrons stream down Earth’s magnetic field to the polar regions where they collide with oxygen, nitrogen and other gases. These collisions cause the gases in the atmosphere to glow.  Green and white are the most common colors. Which color you see depends on the type of gas in the atmosphere.

The Northern Lights come in several different shapes, such as tall undulating curtains or thin arcs. Late in the evening, near midnight, the arcs start to twist and sway, just as if a wind were blowing on the curtains of light. At some point, the arcs may expand to fill the whole sky, moving quickly and becoming very bright.

(Most of the above information comes from the Space Weather Prediction Center on the NOAA web site.)

We had asked the front desk at McKinley Chalet resort to call us if the Northern Lights were visible.  I had just changed into my nightshirt at 11:30 pm when the phone rang.  The aurora borealis was out!  I put on my shoes without socks even though the shoes were wet because I had tried to clean the mud off them. I pulled on my jeans, and put on my fleece and jacket over my nightshirt to go outside.

We weren’t the only ones out there.  Quite a few other guests at the Canyon Lodge had come out into the driveway to see the aurora.

The aurora borealis is rarely seen south of northern Minnesota in the United States. One reason we chose to take this trip to Alaska in late August (instead of June, when the sun never goes down) was in order to have a chance to see the Northern Lights, which I had never seen in my life.

There were long white streaks across the sky.  One of them began in a spot on the horizon where greenish light glowed.  A ribbon unfurled from that spot, which was mostly white but had a tinge of green.  The colors, I’d learned, were created by different gases in the atmosphere.  We watched as it stretched, then curled in a corner of the sky.  The stars shone right through it and the Milky Way was clearly visible, something I don’t see very often.  We watched for awhile longer and Dale attempted to take a picture but couldn’t secure his camera still enough to take a picture with a long exposure.  Someone else had a regular tripod and the picture she got showed the aurora as bright green!  Later, a guide said that it was because the camera can capture more color on a long exposure shot than we can see with our eyes, so that the photo is actually more accurate than our eyes!

I was amazed to see that the stars were visible through the aurora, which of course made sense – after all, the aurora borealis isn’t a cloud!

After 20 minutes or so, we decided to go back inside.  I was excited for having seen it, yet somewhat disappointed that it wasn’t more colorful.  People were looking up on the Internet on aurora borealis web sites to find out when would be a good night for viewing. “5” is the highest ranking given, which indicates the greatest likelihood of seeing it. Two nights later, we had another chance.

Tonight we got another call to see the aurora borealis. It was only 11:30, only two hours past sunset, but we went outside where there were quite a few other people viewing, just as there had been two nights before.  This time the view was more spectacular, and Dale had read his camera’s manual to figure out how to take pictures of the night sky, so he got some great pictures of the green waves and curves of the undulating borealis. The only color we saw was bright green, but some of the others who had been out there longer claimed it had been purplish earlier. 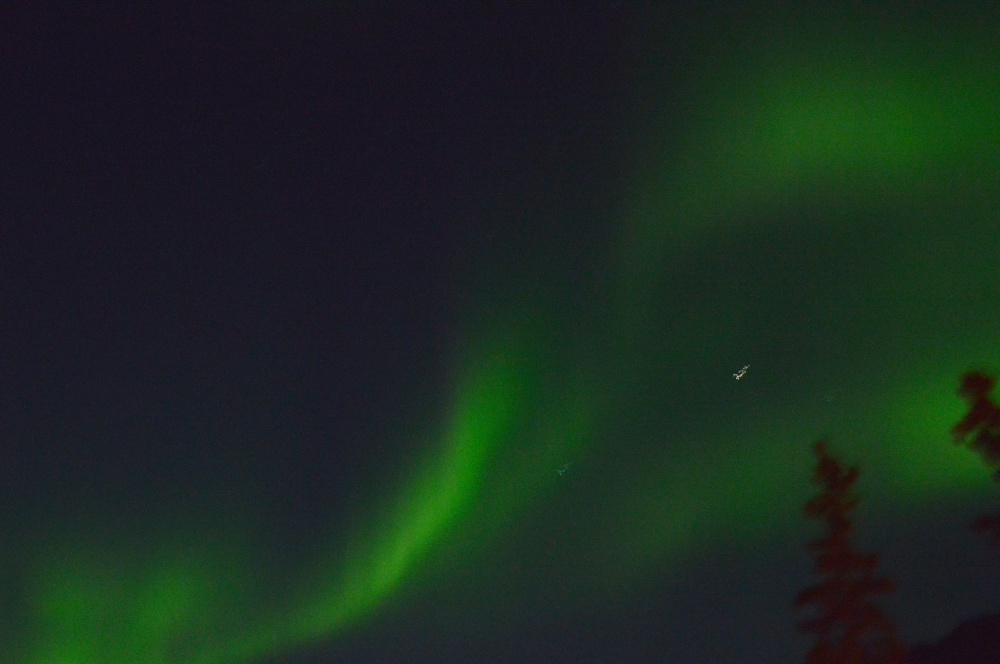