250,000 people filled the streets of downtown Chicago for the Women’s March on Jan. 21. But it wasn’t just women – lots of men and kids of all ages too! My husband, son and I and three friends came downtown by El and metro, met in a predetermined spot, then joined the throng.

My husband, Dale, friend Marcia and me on the El going downtown. Marcia and I are wearing pink “pussy hats” crocheted by another friend who couldn’t go with us. 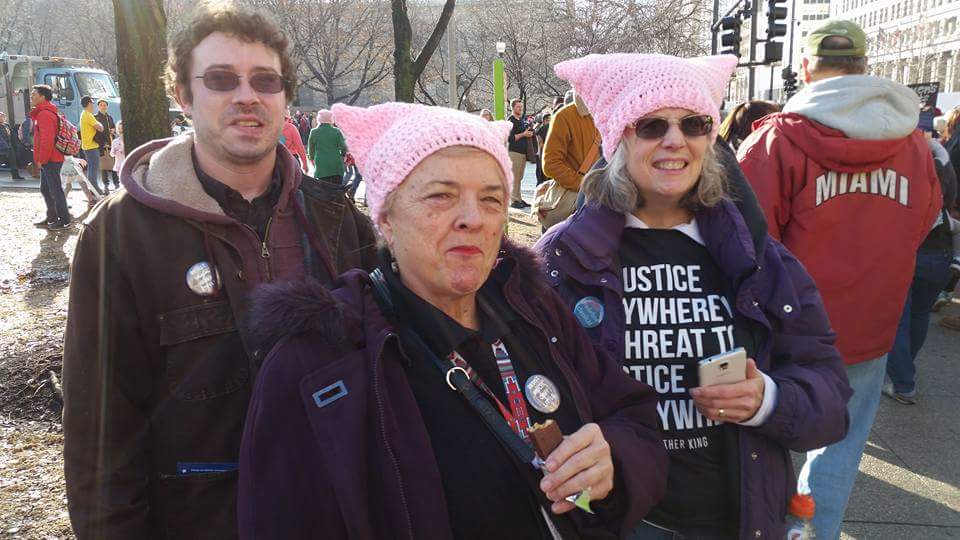 My son Jayme, friend Marcia, and me, waiting for our friends Sandy & Steve 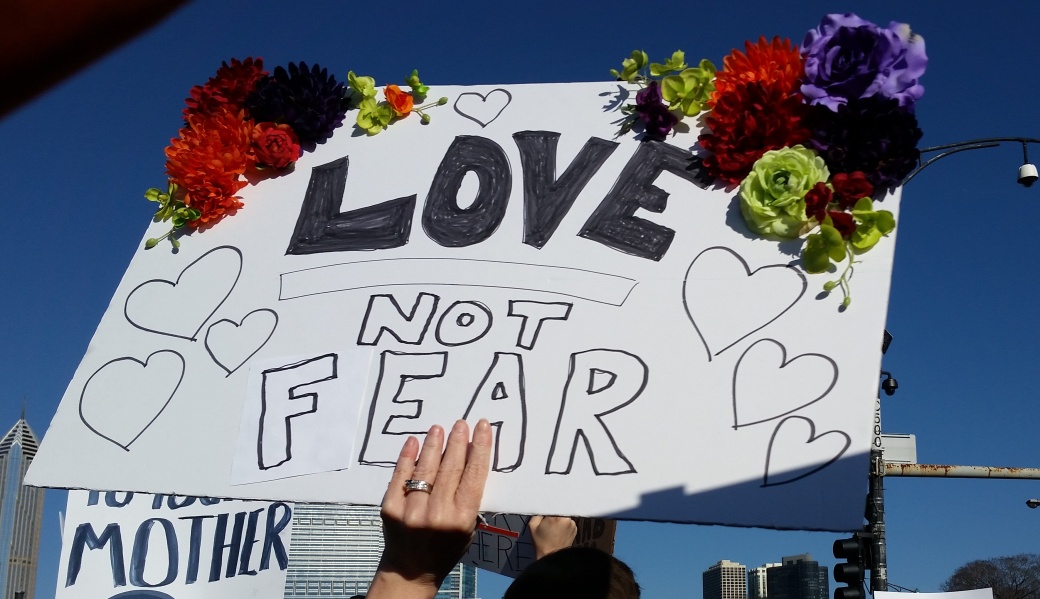 My friend Sandy’s sign – she used “repurposed” flowers from her wedding poster.

The mood was upbeat and the experience made me hopeful.  Although there was a rally with speakers, I never heard them nor even know who they were.  In that mass of people, your universe is the crowd of people who immediately surround you, chanting and waving mostly handmade posters.

Another chant was, “Hey hey! Ho ho! Donald Trump has got to go!” This is a common chant, substituting the name of whoever a group of people is protesting against. During the Chicago teachers’ strike, it was “Hey hey! Ho ho! Rahm Emanuel’s got to go!” In 2012, Rahm Emanuel was – and still is – the mayor of Chicago, who had an ongoing disagreement with the teachers’ union, siding with the board of education.

One of the most interesting things about a rally/march/demonstration is the signs that people create.  There were many clever ones during the teachers’ strike, and the rally and march on Saturday had many creative, and some rather nasty, signs. 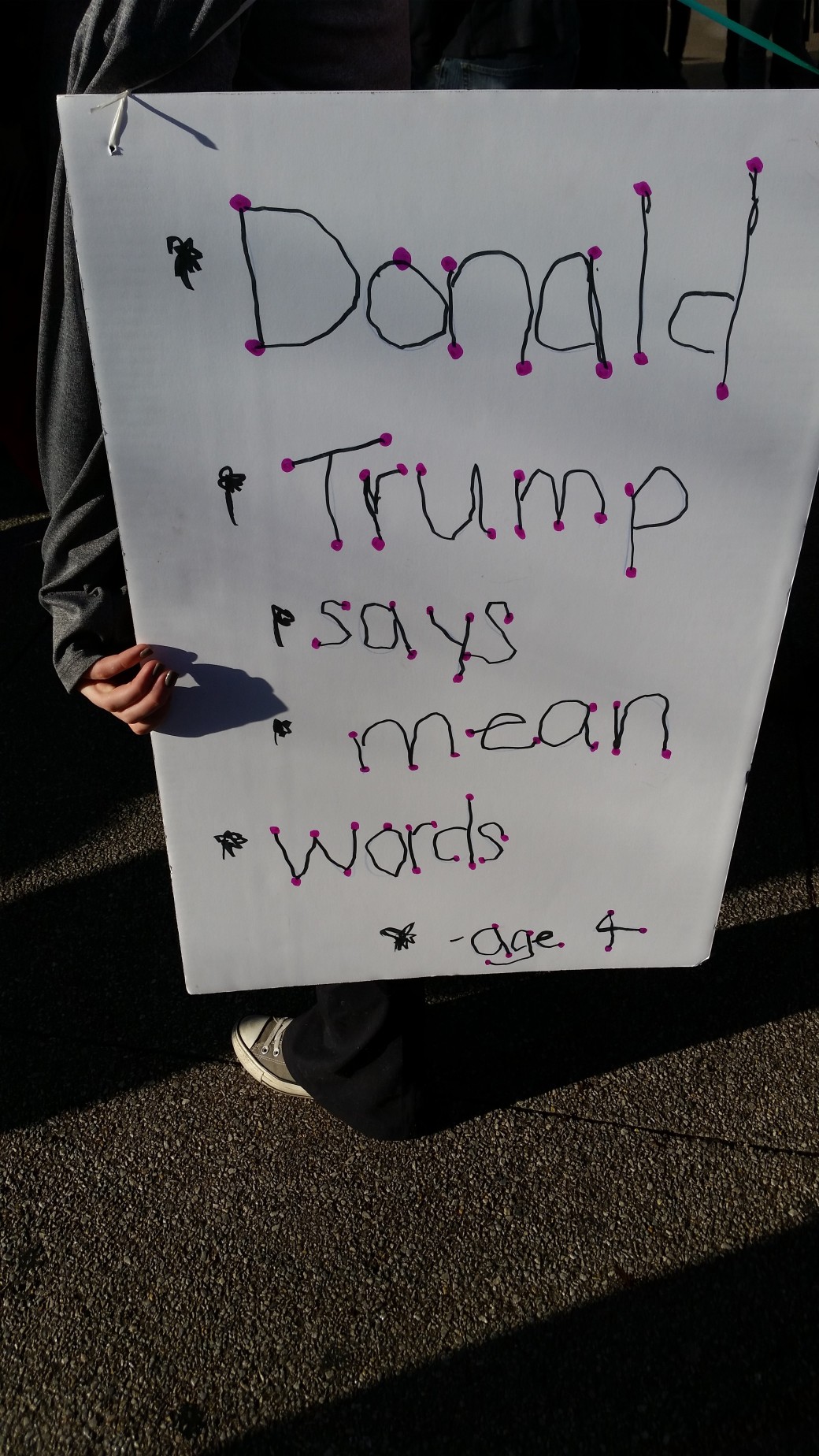 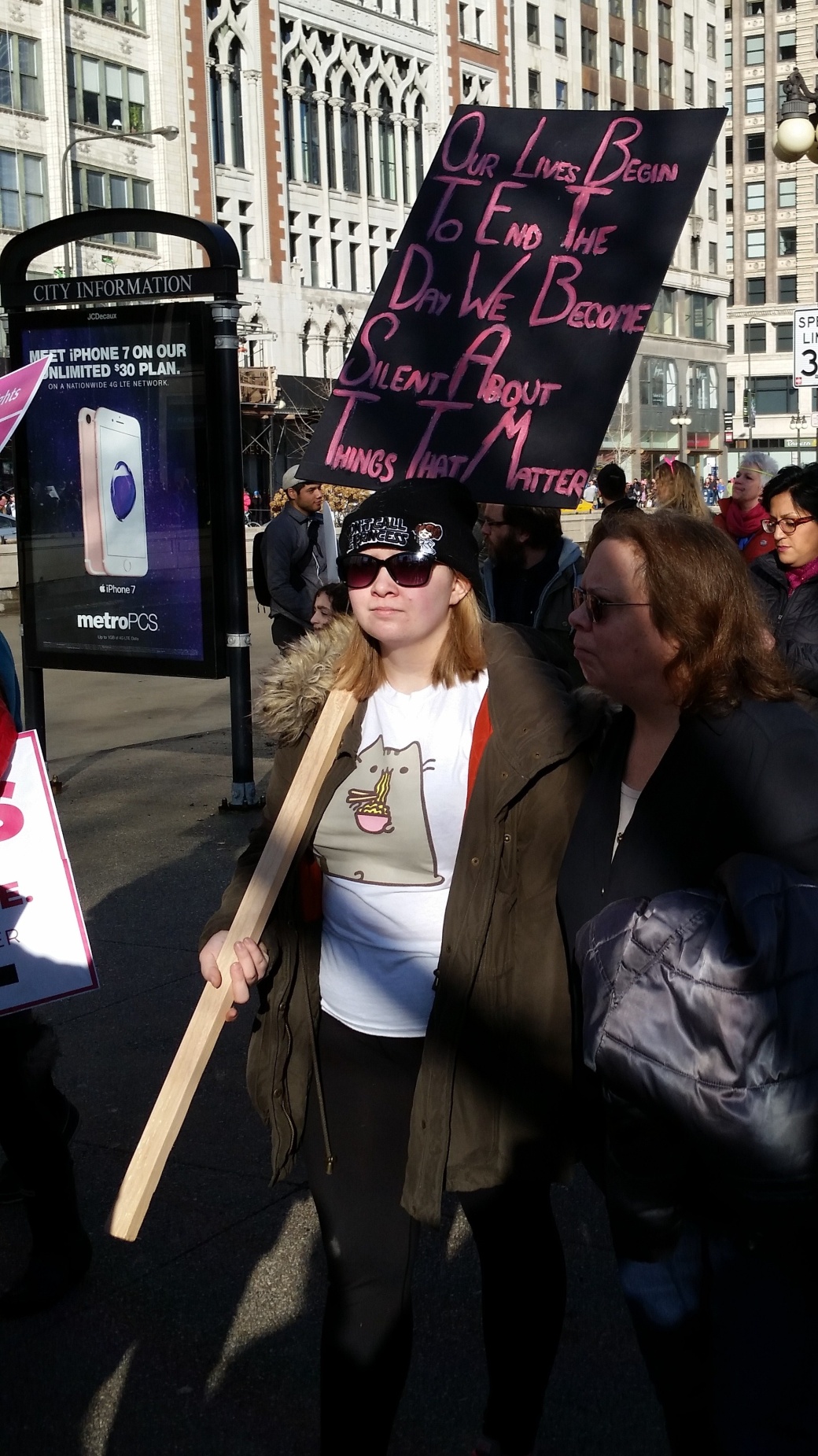 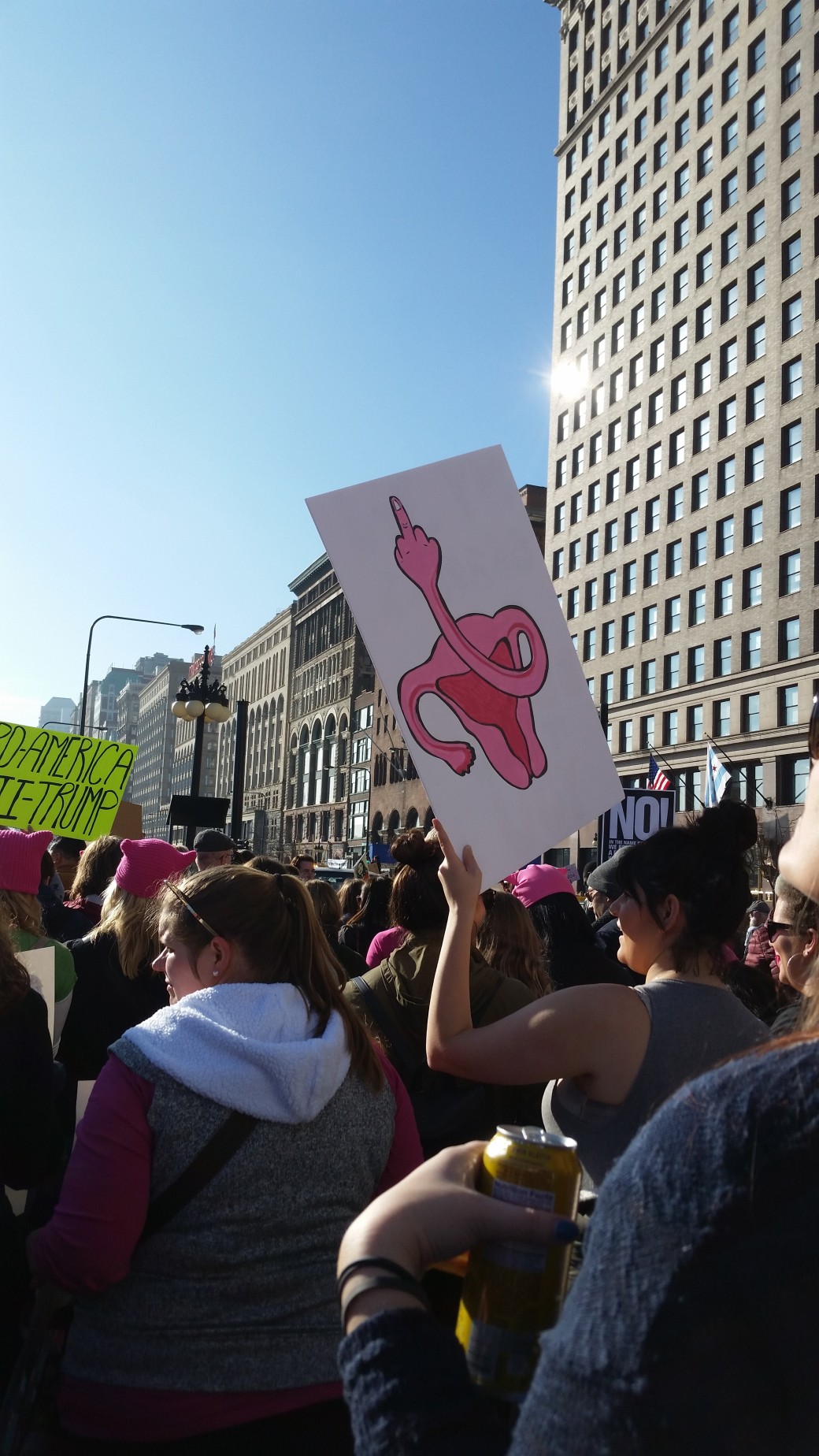 The march on Jan. 21 was mainly to address women’s issues, as a reminder to the new administration that women would fight for their rights and to put them on notice that those marching were in the majority. But everyone had their own agenda and the signs reflected this.

One that I really liked, although the person carrying it passed by too quickly for me to get a picture, had the word REVOLUTION written in black ink across the middle of the sign. The second, third, fourth and fifth letters were written on a diagonal to the rest of the word in red ink, spelling the word “love” backwards.

Here are more of the signs we saw around us. 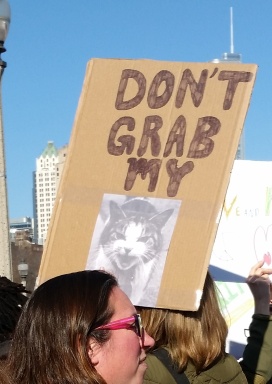 While waiting for something to happen, we counted the helicopters overhead – there were five! Later the photos and videos taken from their vantage point were shown on the national news – quite impressive!!

One of the many men at the march was this guy who dyed his beard pink for the occasion!

In fact, for awhile, the Chicago march was the second largest in the country, after Washington DC. Eventually, though, we were surpassed by other larger cities:  New York had 400,000; Los Angeles had around 700,000! Washington DC had about half a million.

Later, I found out my niece, her husband and their son were at the march too – somewhere!  My 5-year-old grand-nephew, Ben, said he liked the idea of telling the president what we cared about!

After standing in one place for a long time, not knowing if we were going to march or not – first we heard there were so many people that the march had been called off, but then some people came through who said the march was still on – we finally were on the move. My hips and upper thighs ached as I began walking after standing in one spot for so long. We weren’t walking very fast, not in that crowd, but we were moving.

We crossed Michigan Avenue and marched down Jackson Street. A large crowd turned onto another street, at which point we broke away from the march. 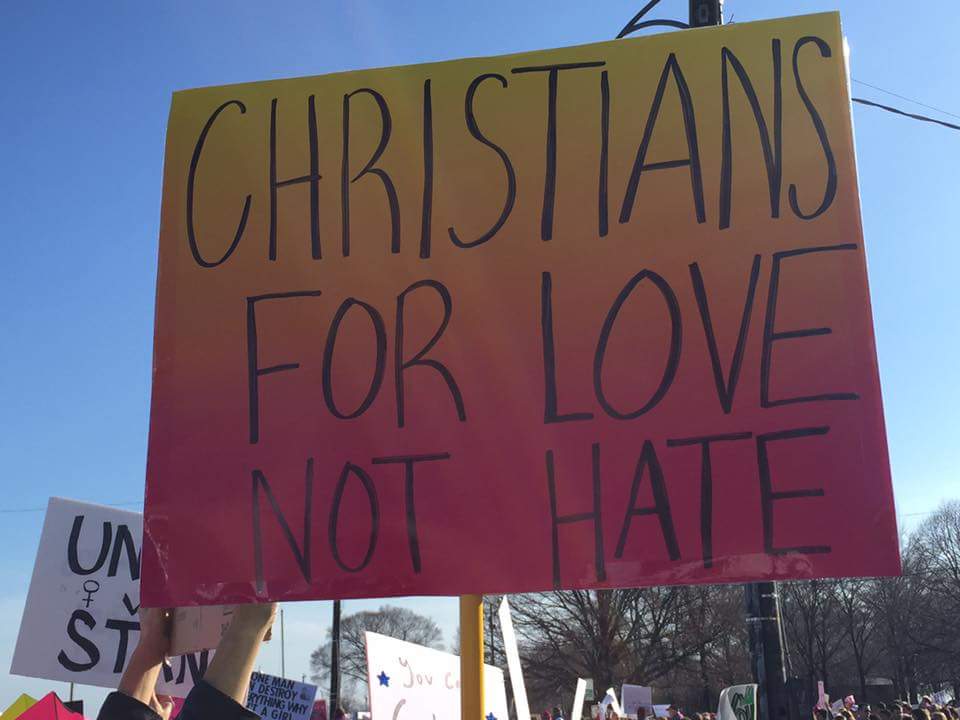 My friend Sandy took this photo of another good sign.

We took these group photos when we were ready to stop for lunch. Although some of the marches around the country went on all day and into the night, Chicago’s started to peter out around 1 pm, at least that’s how it looked to us. Maybe because we were getting hungry! 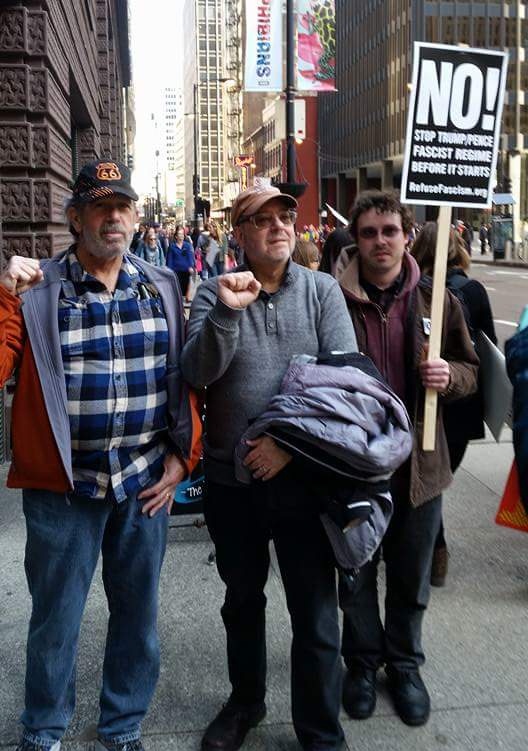 Dale, Sandy’s husband Steve, and Jayme (holding a sign someone handed to him at the beginning)

Us 4 women: Sandy, me, a friend of Sandy’s, Marcia

At that point, we had to get home because Jayme had to go to work and Marcia and I were ushering at a concert later. We rode the El back toward O’Hare, hoping to avoid the crush of marchers heading home. However, every El car was jam packed! As we got closer to the suburbs, the subway cars gradually emptied out as groups of people got off.

The question now is, Where do we go from here? Was this just a single march to protest the inauguration of president we strongly disagree with and to highlight women’s issues? Years ago, Occupy Wall Street looked promising as a people’s movement, but it didn’t go anywhere in the end.  Yet the momentum created last Saturday, with marches in every single state in the U.S. and many more across the world (including Antarctica!) seems bigger than this.  If we are to accomplish anything, we need to keep the pressure on. After all, Trump lost the popular vote by 2.8 million. Also, we need to unite in order to mend the polarization that is threatening to tear our society apart. There is so much acrimony on both sides. It’s gotten way too mean.  One of the most prevalent messages we heard and saw on Saturday was LOVE.

A few pictures from friends and family at other marches:

My nephew Mike, his wife Emily and their 2 1/2 year old daughter Sylvia, at the march in Madison, WI which drew over 75,000 people. My niece in Madison also attended with her husband and daughter.

A friend of mine (in front wearing red shirt) posted this picture of a group that marched in Austin, Texas.

I don’t know anyone in Miami but I liked these signs.

According to what we heard today (Monday), the organizers of the Saturday marches are planning another massive march on April 15 – tax day – to protest Trump’s not releasing his tax returns!

The next four years are going to be interesting, to say the least! And I’m expecting to log many miles in many more marches!

One thought on “Solidarity on Saturday in Chicago”