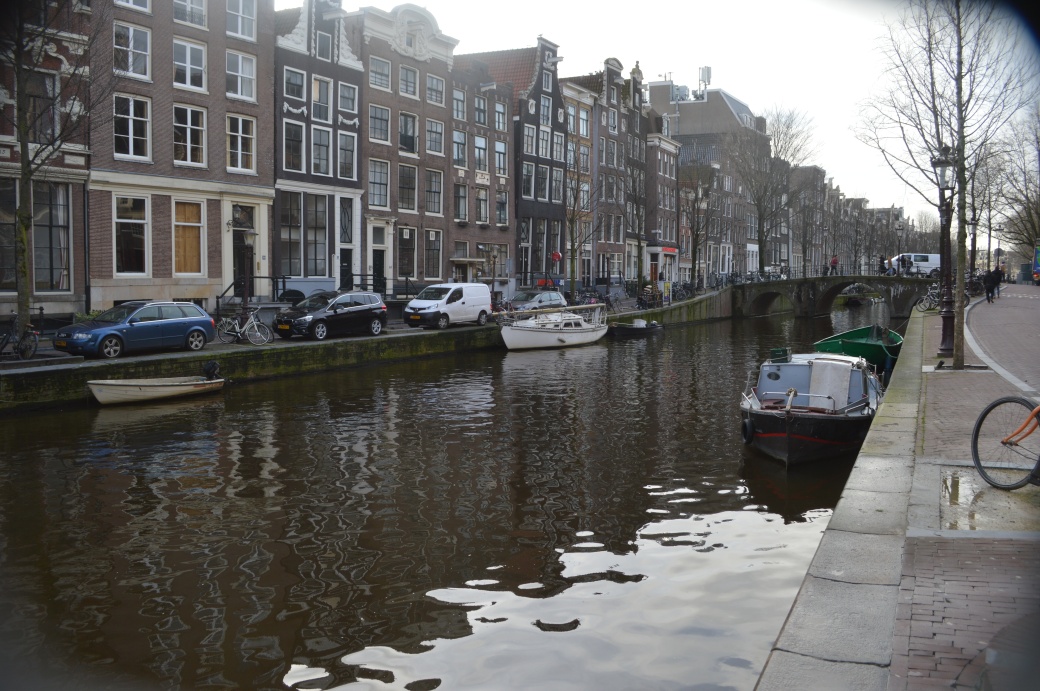 Oude Kerk, or “Old Church” is the oldest building still standing in Amsterdam.  Around it grew the Red Light District, so to get to it, you walk through part of this famous district! (We didn’t see much of it, only shop windows.)

This, the first church in Amsterdam, was Catholic at one time, but later was turned into a Protestant, Dutch Reformed church.

I had gotten the impression from Rick Steves’ book that these old Protestant churches were rather plain and dull. So it shouldn’t take long to see it, I thought. We had limited time and I wanted to tour Our Lord In the Attic church also.

Our I Amsterdam passes got us in free and we were handed a map and a newspaper, which the woman at the entrance said was about art – “it’s not just a church, but also a place for modern art,” she said.

I opened the map but found it confusing so I folded it up again. When we first walked into the church, I was startled by a voice asking something in Dutch coming from a wooden frame dressed in a black coat. Above the coat, attached to the top of the frame was a small lamp pointed downward.

Most of the far wall was obscured by looming black rectangular shapes. They were covered with black plastic so I assumed some sort of renovation was going on.

There was also a strange sound echoing through the building – a high pitched wind sound. Dale thought it was the sound of some tool being used by the workers, although we didn’t see anyone working. In the center of the room, instead of pews, were rows of black coats lying on the floor.

The floor itself had what looked like grave markers – I was familiar with this – many old churches had people buried under the floors. 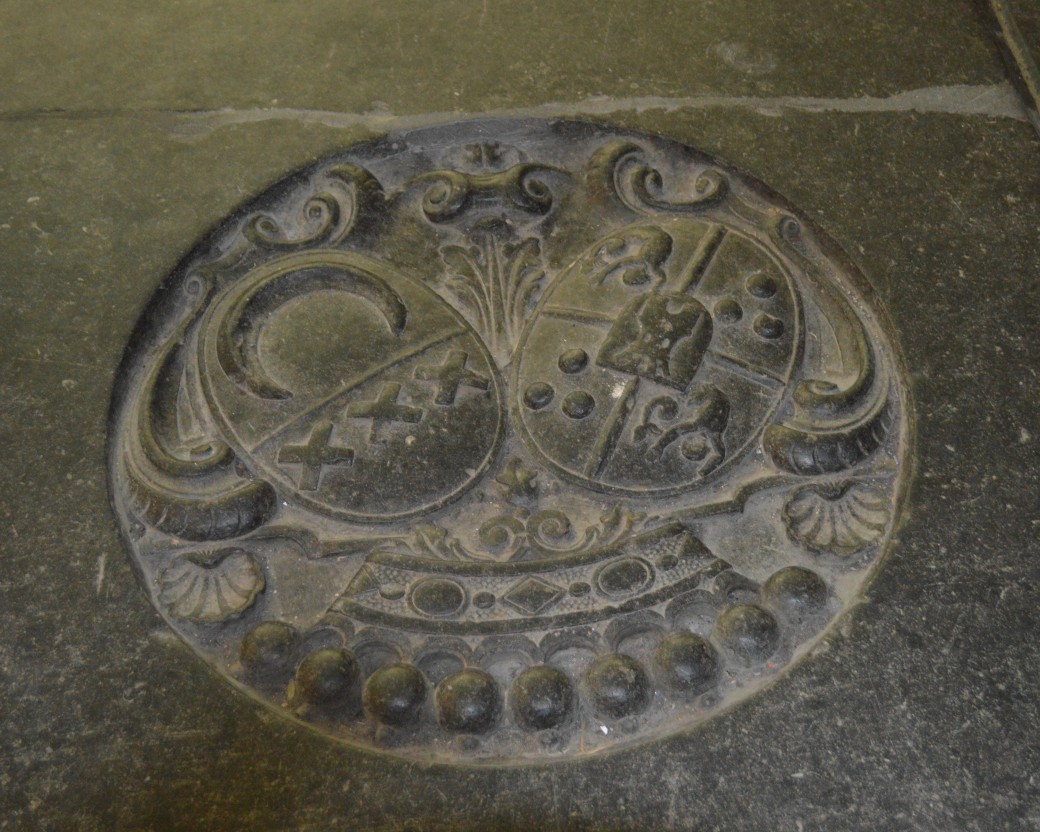 On the far end were a bunch of folding chairs draped also with black coats and against a dark partition at the back was an arrow pointing upward, made out of light bulbs. OK, I understood the point – the black coats represented people who had died or were buried here, but I didn’t understand how the arrow fit in with this theme.

Then I heard whispering. It was coming from the rows of seats flanking the center, where the choir would sit. I had approached these because the back of the chairs had interesting figures carved on them. It must have been quite uncomfortable to sit with one’s back against these protrusions, I thought. Being a choir member myself, I always notice the accommodations for the choir when I visit other churches. 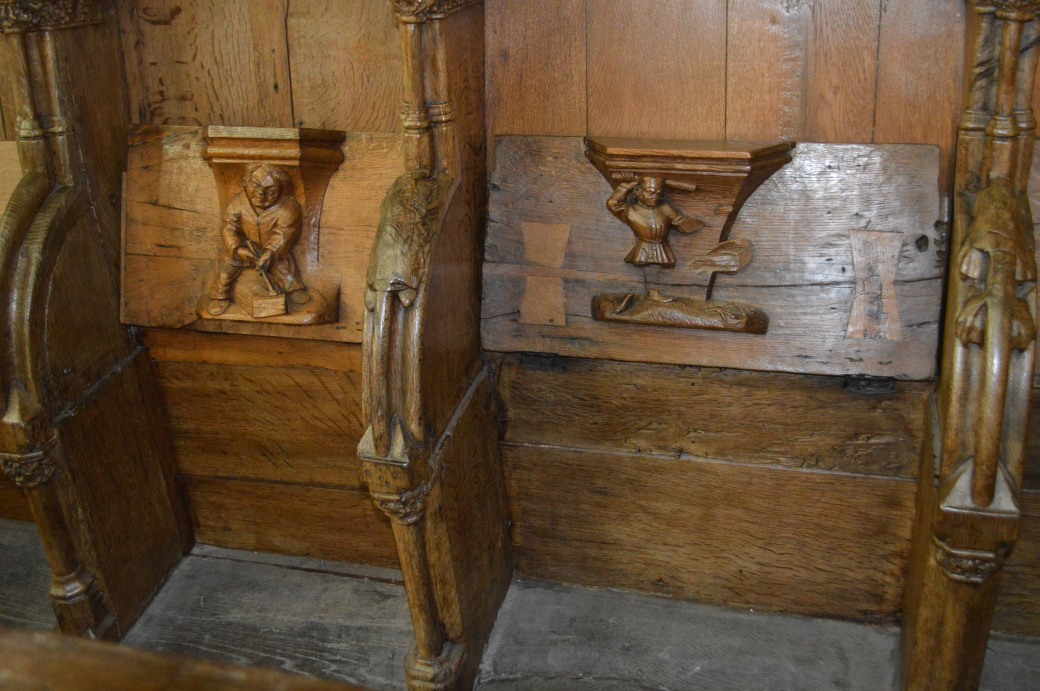 As I snapped some photos, I heard a whispering voice but couldn’t make out what it was saying. Some words seemed to be repeated – was it a macabre poem in Dutch, or an obscure religious text?

Hearing it a second time on the other side, I decided to take a short video so I could record the voice. This time I understood – it was whispering names: “Cornelia” was repeated twice, then other presumably unintelligible names. Who was Cornelia and why was she being summoned by this eerie whisper?

Only later, back in our apartment, when I read the paper we’d been given, did I really understand. There was no construction or renovation going on.  It was an art installation called Na by artist Christian Boltanski.

Photo of artist Christian Boltanski standing in the Oude Kerk (scanned from newspaper about the exhibition).

The bulky black shapes represented looming tombstones of various heights. The names being whispered were those of the 8,000 people who were buried underneath the church! Somewhere there was a recording machine with an invitation for visitors to record their whispering one of these names. There is no distinction between male and female voices when they are whispering, so the voices would be anonymous. As for the names, they were all printed in a small book near the entrance, which I missed completely. The questions posed by the anonymous black coats on frames were meant to make the visitor wonder about the dead: “Did you suffer when you died?” Each question was different. Being in Dutch, I could not contemplate these questions regardless.

“Crepuscule” – Through wires, 158 (the number of days of the exhibition) lightbulbs are connected on the floor. As time passes, one lamp will automatically be switched off at noon every day until all of the lights have faded on the last day of the exhibition.

The newspaper article concludes, “With his work, Christian Boltanski (b. Paris, 1944) inquires about the life and death of anonymous people and groups whose history is in the process of fading away.  In the Oude Kerk artists hold meanings from the past up to the light again, adding new pages to (art) history with their work.”