On our recent road trip, going out to California, we chose our destinations. I had never been to Nebraska (the only state completely west of the Mississippi that I had never set foot in), so on our way west, we stopped in Lincoln and North Platte, Nebraska. (Yesterday I posted about Bailey Rail Yard in North Platte).

Lincoln, the capital, was the city in Nebraska I really wanted to visit. Having driven all day yesterday from Chicago, we stayed overnight in Omaha, then the next morning drove the 50 or so miles to Lincoln.  Our first stop was the capitol building. 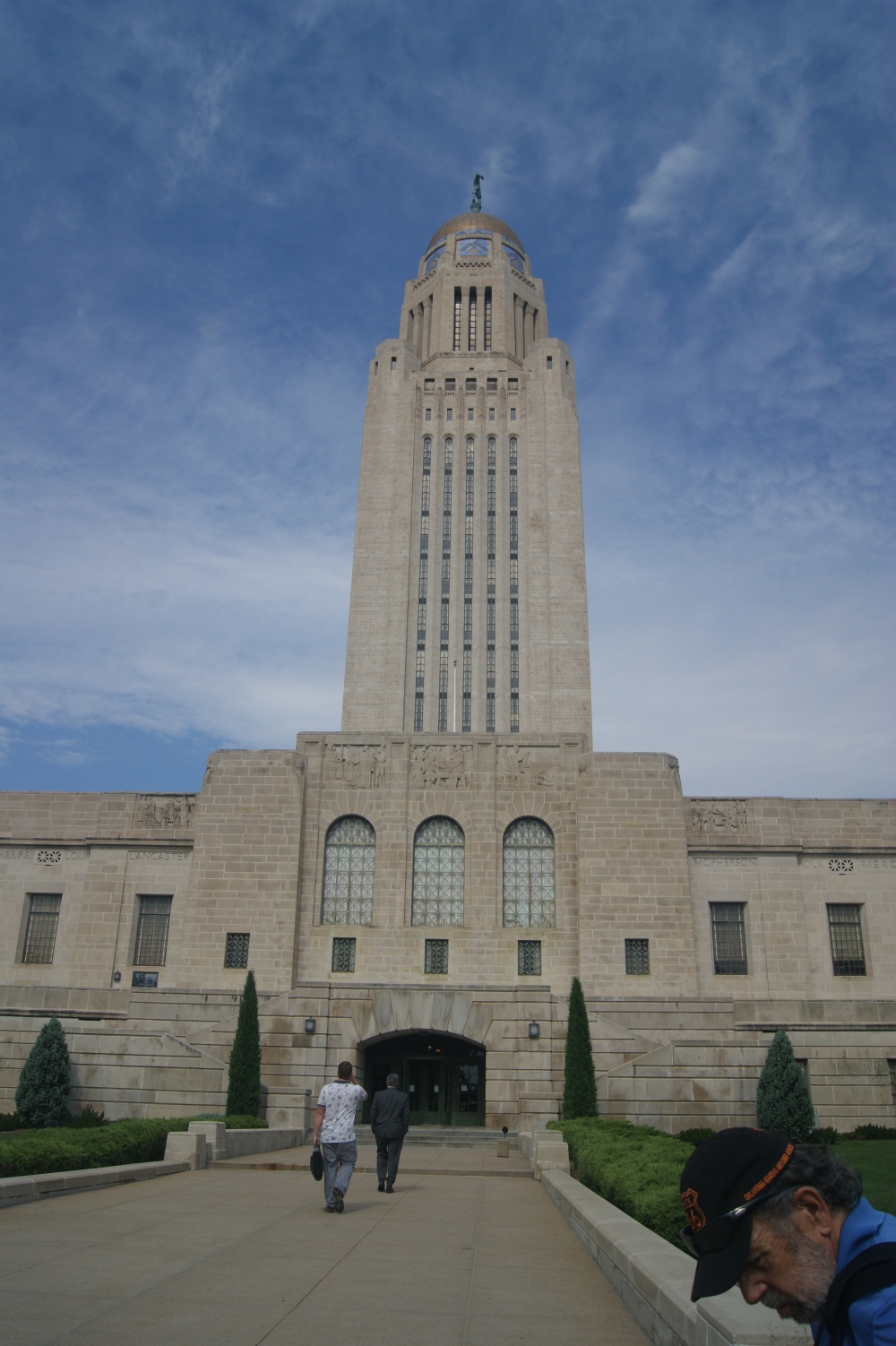 I am including this post as my contribution this week to Norm’s Thursday Doors weekly challenge, because there are at least three doors among these photos!

There was some construction going on at the capitol building, so we could not enter via the front door. Instead, we were directed by signs to enter on the east side of the building admittedly not the prettiest doors! 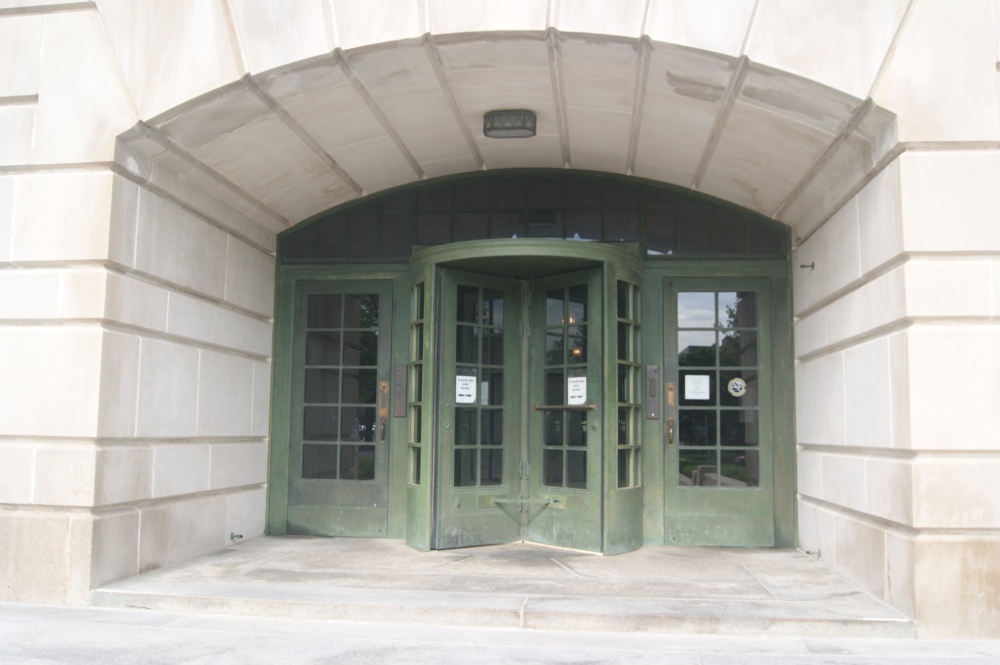 In 1922, when the new capitol building was commissioned, the architect included two artists, sculptor Lee Lawrie and mosaicist Hildreth Meiere, on his design team in order to integrate art and architecture. Since these artists were from New York, they relied on a Nebraskan Professor of Philosophy Hartley Burr Alexander to develop a thematic program to guide their work. Alexander’s guidance can be seen throughout the building interior and exterior.

Meiere’s floor and ceiling mosaics representing the natural, social and political development of Nebraska were influenced by Alexander’s ideas. 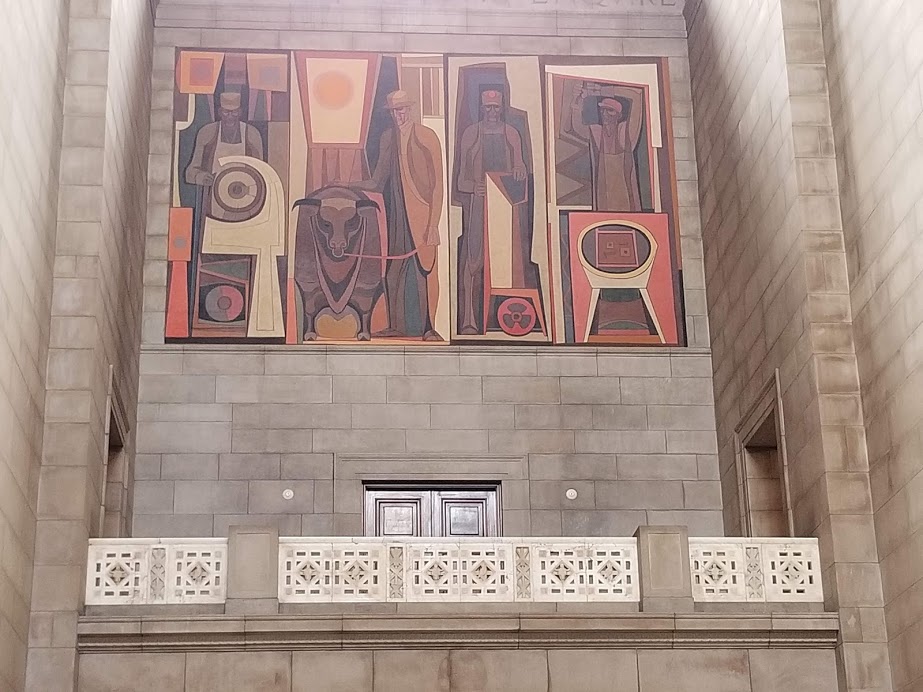 Some of the mosaic murals were abstract… 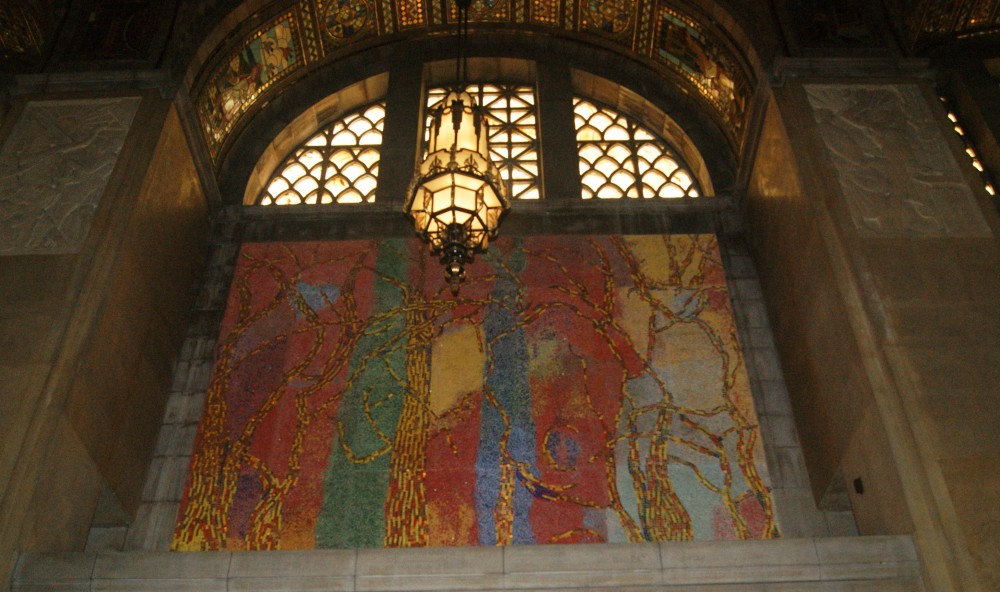 while others depicted pioneer life. 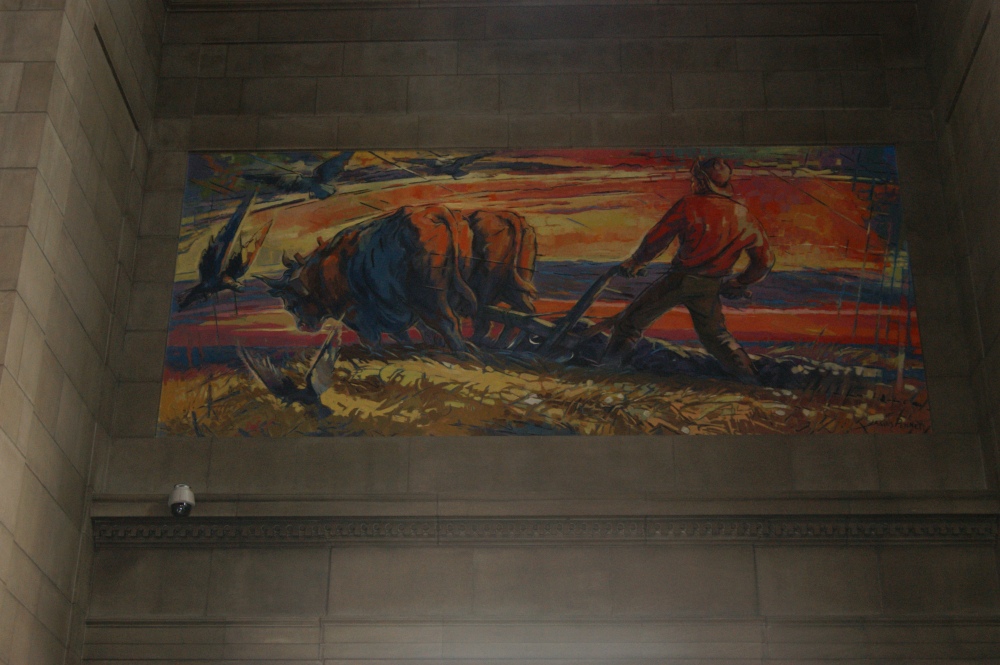 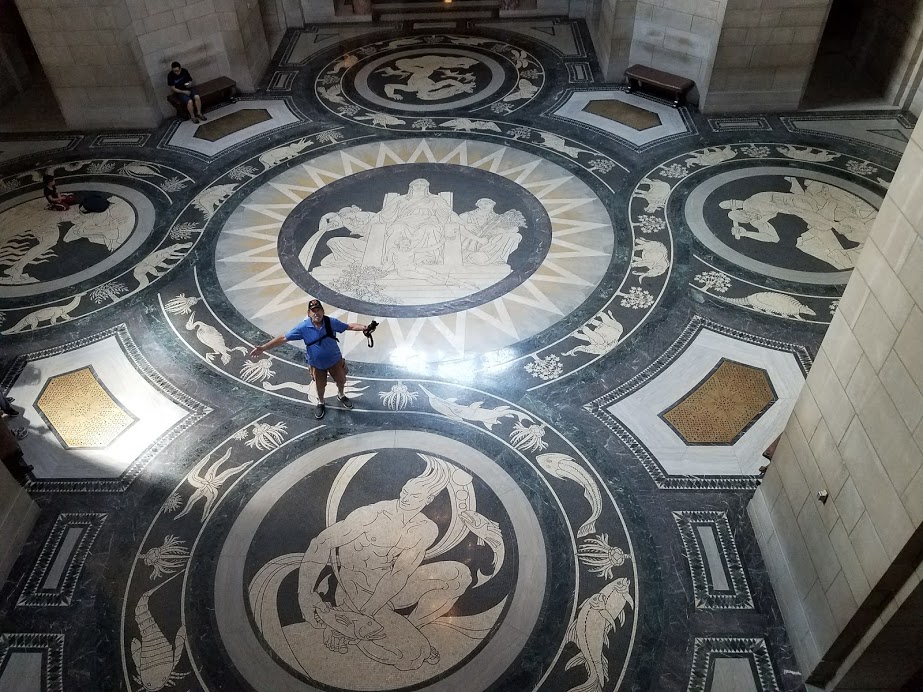 It was the day after Memorial Day, a popular time for school field trips.

This is the dome you see if you stand in the middle of the rotunda and look up. Can this possibly be the dome on top of the building? I don’t think so. 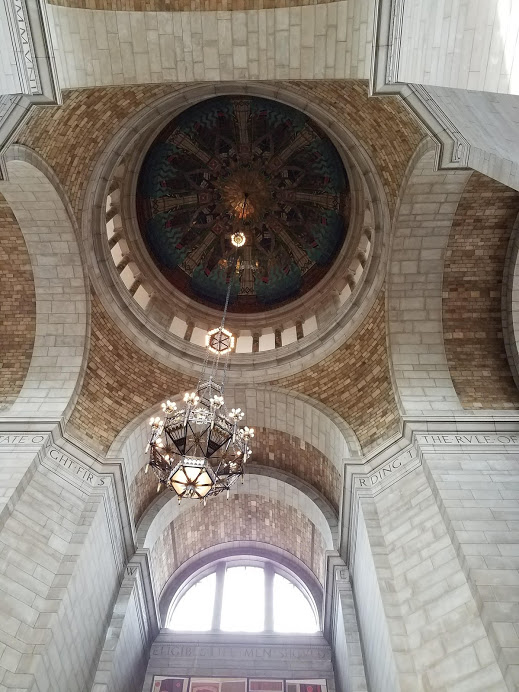 Ceiling above this chandelier

There are elevators available to go up to the Congressional offices and possibly,
get a look at the dome at the top.  (The statue on top of the dome is called “The Sower,” a person casting the seeds of life to the winds. It was created by New York sculptor Lee Lawrie.)

Follow this hallway to enter the House of Representatives.

House of Representatives (We were not able to visit the Senate).

The ceilings in the hallway were beautiful works of art in themselves….

…and so were the floors.

A blocked door at the end of the hallway above

The Nebraska Hall of Fame took up two hallways, with busts of notable Nebraskans… 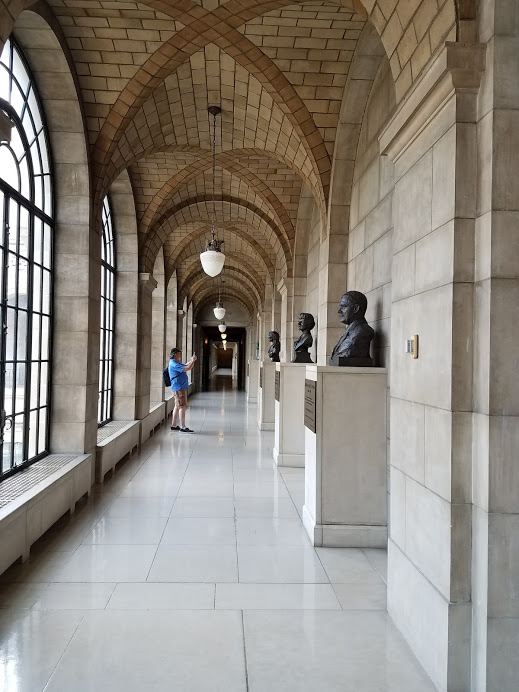 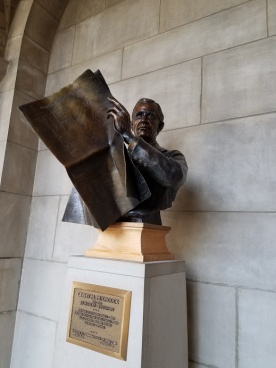 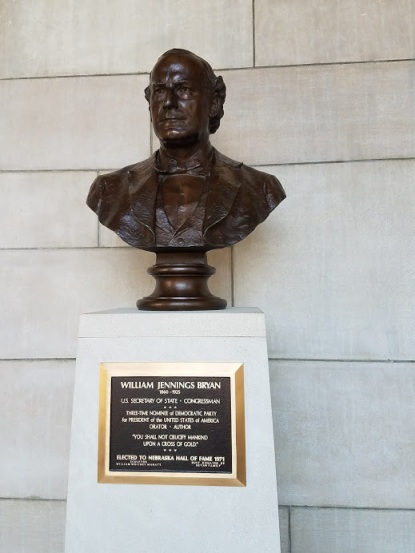 Oh, and not to forget the most famous of all, Red Cloud (Oglala Lakota warrior) and William Frederick Cody “Buffalo Bill” (soldier, showman of the West). 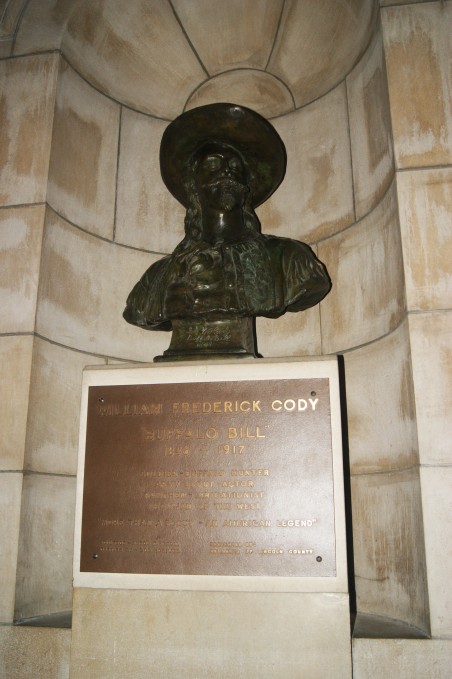 Outside the capitol was the Lincoln monument. It is the only structure on the grounds that predates the construction of the capitol. At the 1912 dedication of this monument, William Jennings Bryan spoke to a crowd of thousands. The statue was sculpted by Daniel Chester French, commissioned in 1909. The bronze statue’s posture is one of reverence over a grave, representing Lincoln’s Gettysburg Address, which is carved on a stele flanked with eagles.

I thought the state capitol in Lincoln, Nebraska was the most beautiful I have ever seen. However, on this trip, I was to see four more!