It has been awhile since I have posted my feature “Artful Photos” – series of photographs of art and artists. Granted, I have posted random street art from various places, but at an art museum I can focus on one theme or artist.

While we were in Santa Fe on June 12, we stopped in to view the Georgia O’Keeffe Museum, where a collection of some of the artist’s best works are displayed. O’Keeffe moved to New Mexico after a visit to the Southwest and began incorporating the colors and shapes of the landscape in her paintings.

The great thing about this museum is that since it focuses on one artist, it is not too large and doesn’t take long to view the entire collection. It is the largest permanent collection of her work in the world.

Admission was $13 per adult; there is no Senior discount.

The museum is located at 217 Johnson St., Santa Fe, NM. To learn more, including how to visit her home & studio 60 miles north of Santa Fe, go to the museum’s website.

Three years later, she no longer had the funds for artistic training, so she became a commercial artist for two years, then spent seven years teaching in Virginia, Texas and South Carolina, and continued her studies during the summers.

During this time, she was introduced to the principles and philosophies of Arthur Wesley Dow, who espoused created works of art based upon personal style, design, and interpretation of subjects. This caused a major change in the way she felt about and approached art and by 1915 began painting primarily in an abstract style.

She met Alfred Stieglitz, an art dealer and photographer, who exhibited her works in 1917, and who, in 1924, became her husband. By that time the couple was living and working in New York.

O’Keeffe is well-known for her paintings of flowers which appear to resemble female genitalia, although she always denied this.

O’Keeffe and Stieglitz lived together in New York until 1929, when O’Keeffe began spending part of the year in the Southwest, which inspired her paintings of New Mexico landscapes and images of animal skulls.

After Stieglitz’s death, she moved to New Mexico permanently at Georgia O’Keeffe Home and Studio in Abiquiú, but spent the last years of her life in Santa Fe.

O’Keeffe and photographer Michael Namingha visited a place with unusual rock formations that she called “The Black Place.” She did a series of paintings based on this place. 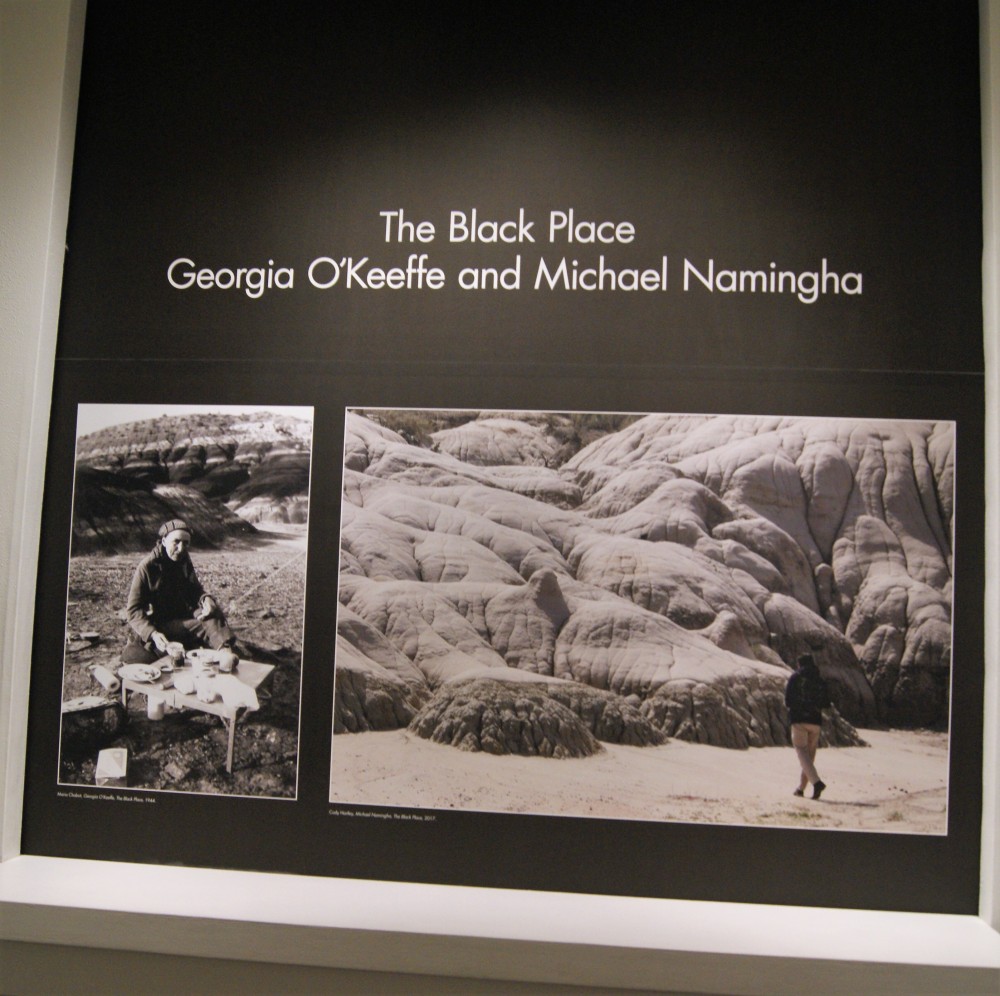 Besides skulls and landscapes, she painted subjects from Native American cultures, such as these kachinas.

In her 70s, Georgia O’Keeffe travelled around the world, the airplane rides inspiring her Sky Above Clouds paintings. She visited Cusco and Machu Picchu, Peru, which inspired the two paintings below.

In 2014, O’Keeffe’s 1932 painting Jimson Weed sold for $44,405,000, more than three times the previous world auction record for any female artist. The Georgia O’Keeffe Museum was established in Santa Fe after her death.

(Note: Some of the information above was obtained from Wikipedia.)