We left the Egyptian Museum ready for lunch. We boarded our bus and headed to Old Cairo, where we would go to a restaurant for lunch and to the Christian Quarter of Old Cairo.

At Felfela Restaurant we were greeted by this hookah-smoking dwarf. 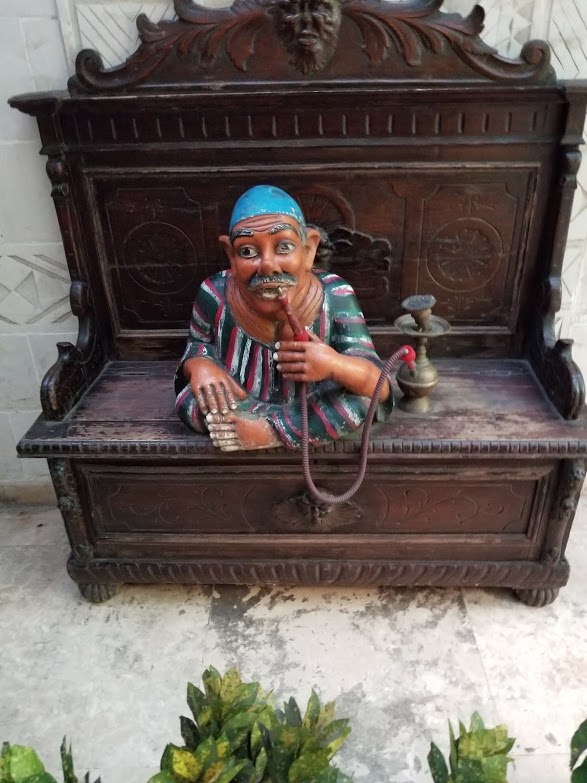 The restaurant had interesting décor.

Our tummies satisfied, we boarded our bus again and headed to the Christian Quarter. Here are some scenes taken from the bus.
Near the Marriott Hotel:

Seen on the street near the restaurant – we would see many more stray cats. 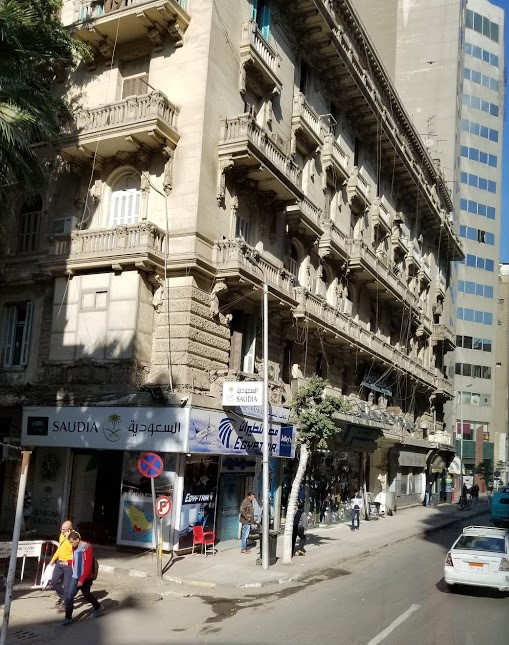 St. Virgin Mary’s Coptic Orthodox Church, also known as the Hanging Church, is one of the oldest Christian churches in Egypt; its history dates to the 3rd century CE (AD), when there was first built a church on the site.

The name “Hanging Church” comes from its location above a gatehouse of the Roman fortress, Babylon Fortress – its nave is suspended above a passageway.

The ruins of Babylon fortress

This doorway leads into the courtyard shown in the next picture. 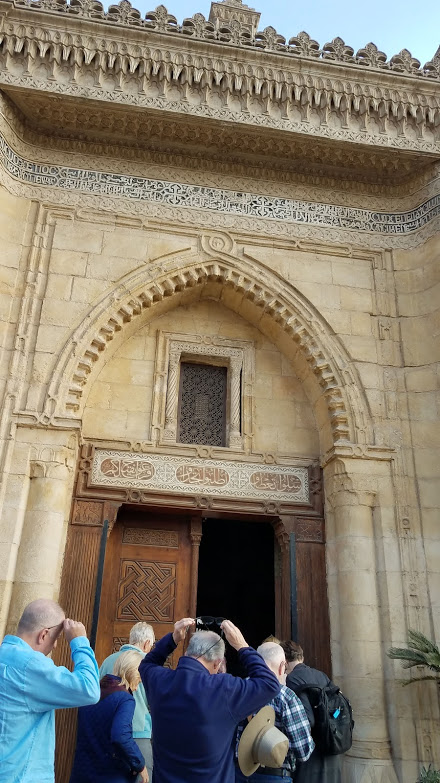 Mosaics on the walls of the courtyard 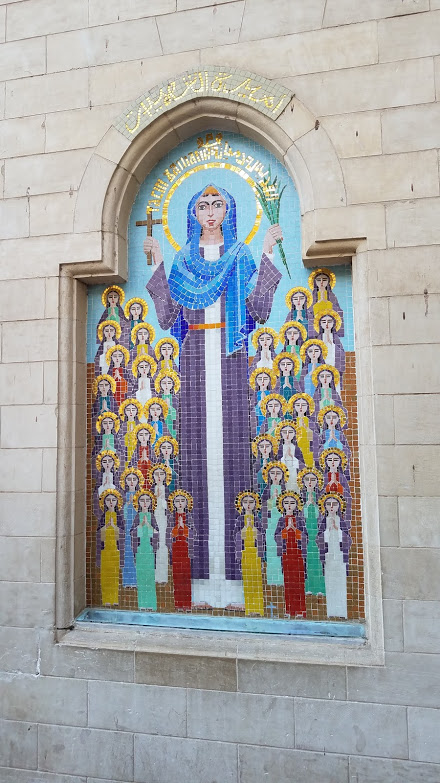 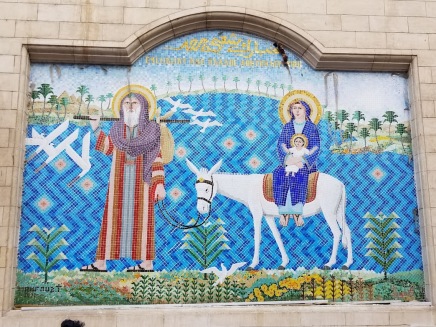 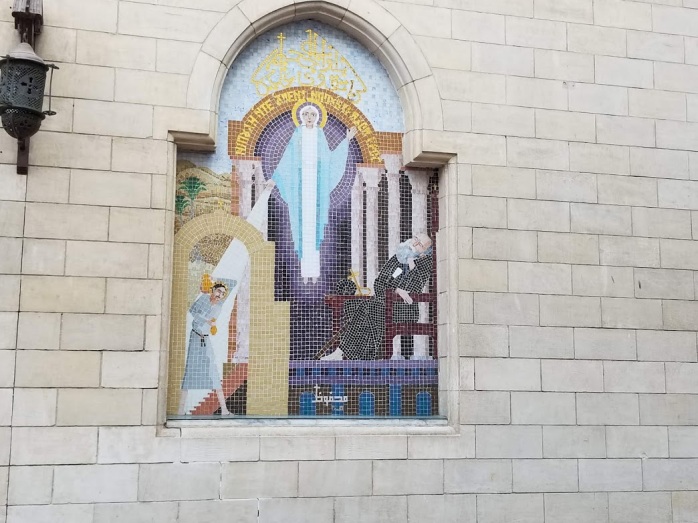 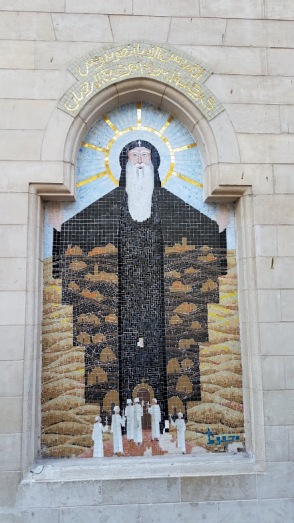 The church was built in Basilican style (rectangular buildings with a central nave and aisles, and a raised platform for the altar in front)  and is meant to resemble the shape of Noah’s Ark. The church was mostly rebuilt in the 10th century and many restorations have occurred since then, major repairs and restoration most recently made in 2011. 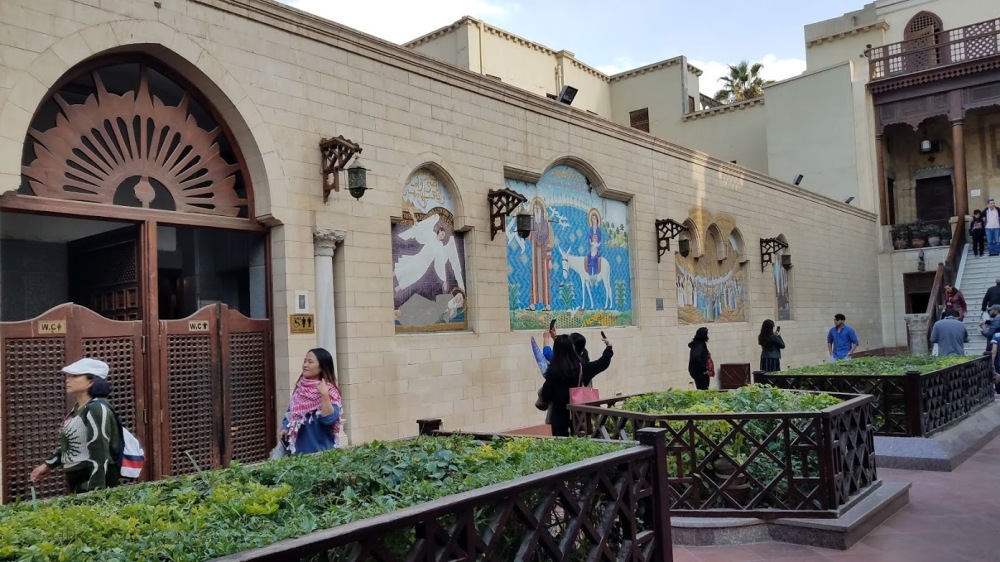 In 1047 Cairo became the official and fixed residence of the Coptic pope at the Hanging Church. 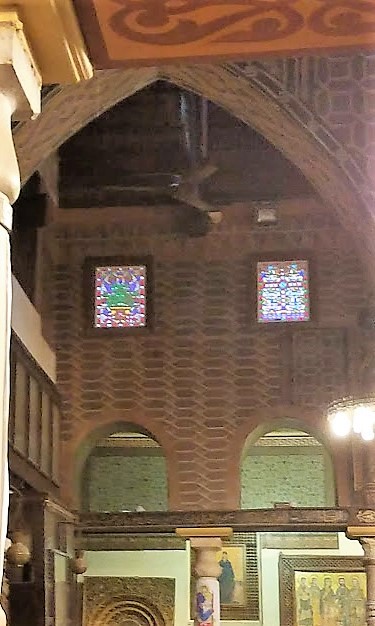 Orthodox churches do not have statues (which they consider to be idolatry), so Christian symbols and pictures are represented by icons. The Hanging Church has 110 icons, most of them dating to the 18th century. 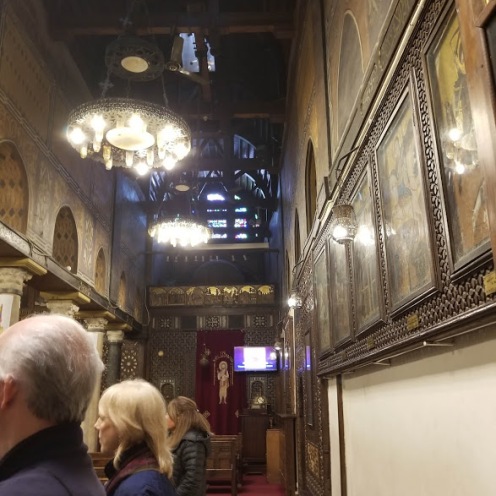 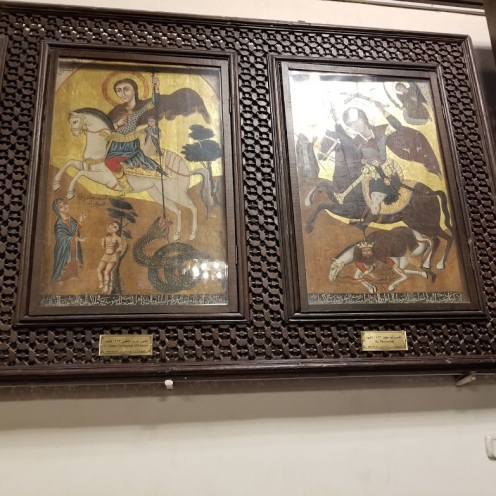 The main altar design is made of ebony with inlaid ivory. 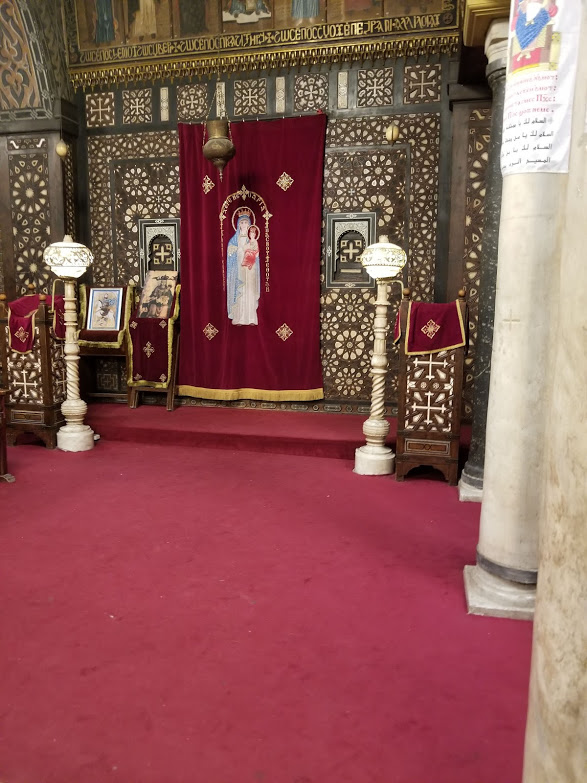 Over the altar is a row of seven icons, with Christ seated on a throne in the center. 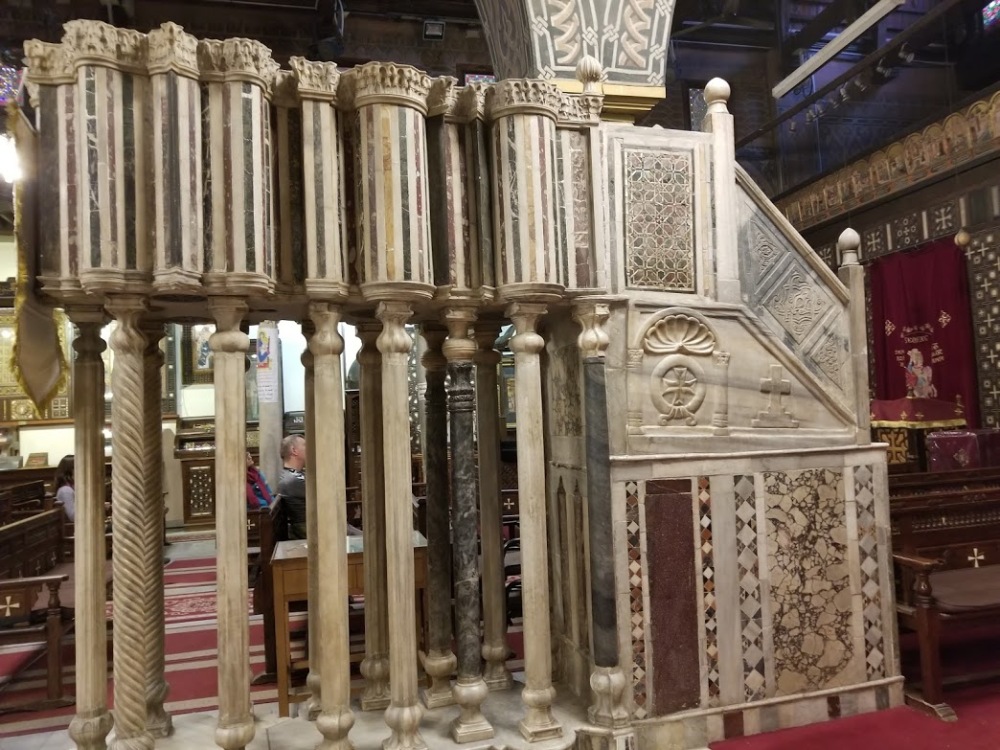 Chapels: note the designs of Coptic crosses above and along the sides of the central icons. 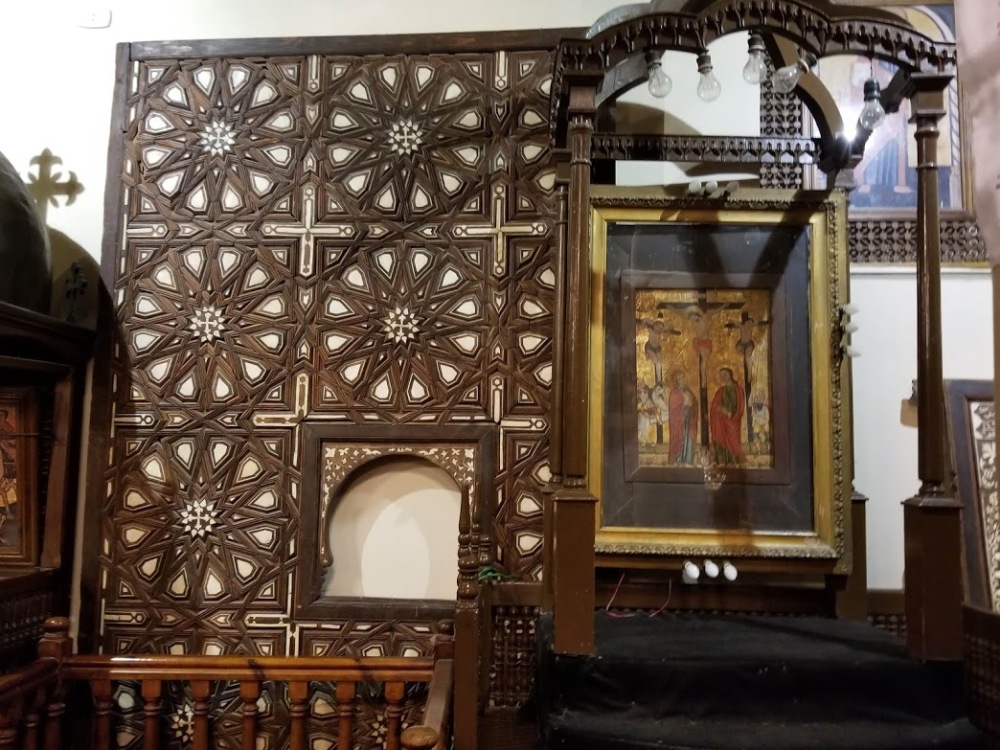 View of Babylon Fortress from inside the church

From the Hanging Church, we went next door to the Church of St. Sergius and Bacchus, known as Abu Serga. It is also referred to as the Cavern Church, and is believed to be where the Holy Family rested at the end of their voyage into Egypt.

Sergius and Bacchus were soldier-saints martyred in the 4th century in Syria by the Roman emperor Maximium. 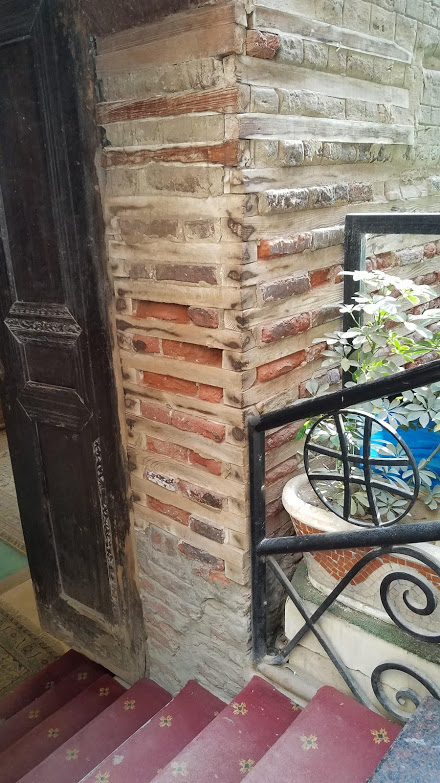 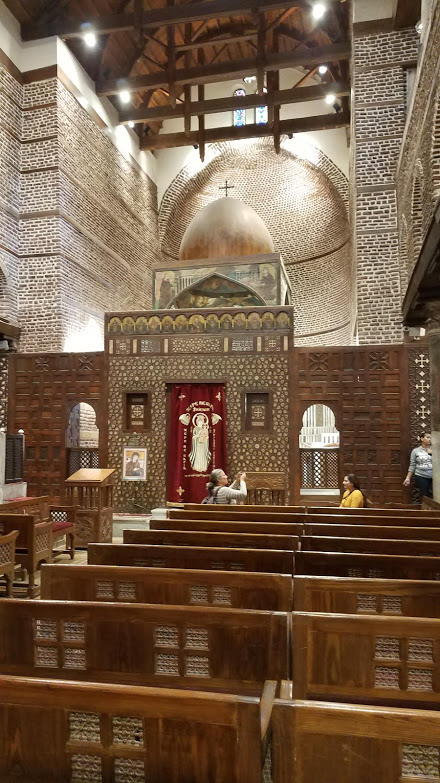 This church is where many of the early Patriarchs of the Coptic Church were elected, the first being Patriarch Isaac (681-692). 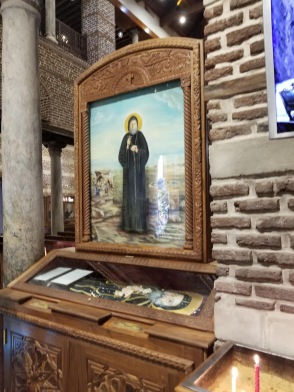 The most interesting part of the church is the crypt in which Joseph, Mary and baby Jesus were to have lived for three months, possibly when Joseph worked at the fortress (he was a carpenter).

This is the room where the Holy family spent three months. It is 10 meters deep and when the Nile River rises, it often floods.

I was very moved by this place, picturing Mary and Joseph with their small child trying to keep warm in this space. Below is the well used by the family. 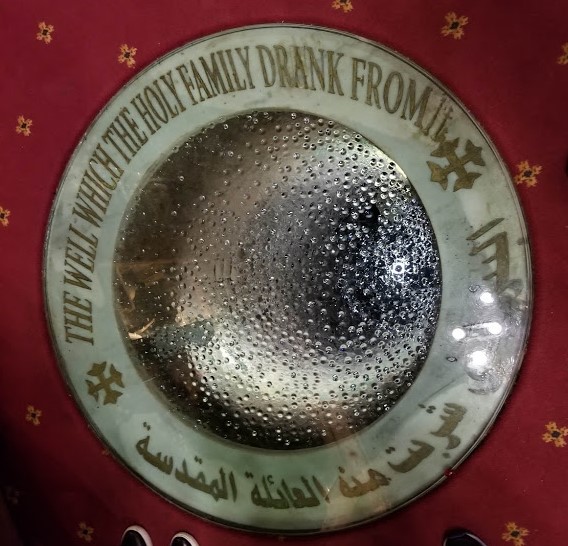 It is always significant to stand in the place where one’s ancestors or in this case, where Jesus, lived, sharing that space with the spirit of those from long ago.

After that, we visited another place of Biblical significance: Ben Ezra Synagogue.

We were not allowed to take any photographs inside the synagogue, so my photos are only from the outside. It is famous for the fact that it is believed to be the spot where baby Moses was found, and later where Moses prayed.

There are very few Jews left in Egypt; tens of thousands left at the foundation of the state of Israel in 1948. Now there are less than a dozen Jews left, yet a few dedicated individuals preserve this holy place.

The synagogue is not used as a place of worship or study today; it is instead primarily a museum. 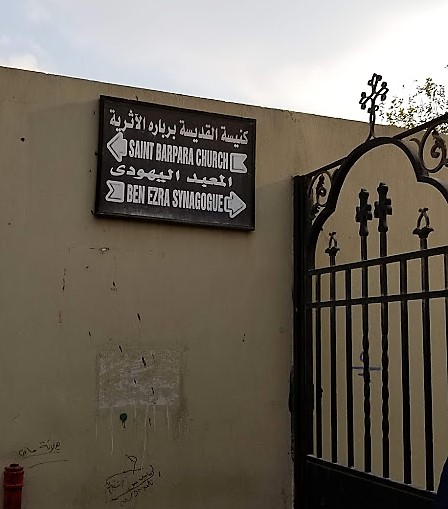 It is believed the synagogue predates 882 CE, based on documents found in a store room (see below), and probably was built prior to Islamic rule. However, little is known about the original building. In about 1012 Fatimid caliph Al-Hakim bi-Amr Allah ordered the destruction of all Jewish and Christian places of worship.

In this synagogue, a store room was found in the 19th century that contained a treasure trove of ancient secular and religious manuscripts written in Hebrew, Aramaic and Judeo-Arabic.  The collection is known as the Cairo Geniza and is now divided among several academic libraries. 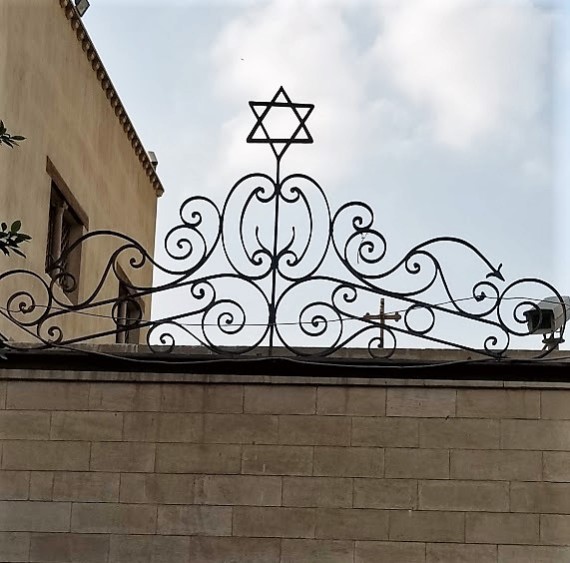 This is the location of a well on the spot where Moses was said to be found floating in a basket on the Nile River.