All the funerary temples and tombs are located on the west bank of the Nile. The ancient Egyptians believed that death was associated with the sunset, and thus all the temples to the deceased were to be built on the side of the setting sun. All temples of the living (such as Karnak) were built on the east side of the Nile.

As we drove toward Hatshepsut’s Temple, the landscape was littered with caves and archaeological excavations. 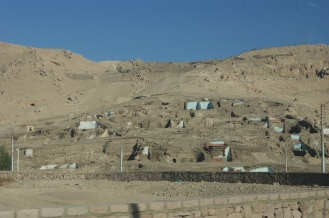 As we approached  the Mortuary Temple of Hatshepsut, it looked like a modern building. Its appearance surprised me. Fodor’s Egypt (2009) calls it “a sublime piece of architecture” built by the architect Senenmut. It is composed of three double colonnades rising on terraces built into the limestone cliff on which is was built. Senenmut modeled it after the mortuary temple of Mentuhotep II, who founded the 11th dynasty in the Middle Kingdom. Mentuhotep II’s temple is right next to that of Hatshepsut, and it served both as a model and a quarry, for by that time, a thousand years later, there was not much left of the older temple, eroded by time and vandalism.

I was tired after having visited the Valley of the Kings and Howard Carter’s house that morning and felt somewhat sick. I climbed the first set of stairs to the large terrace between the first and second colonnades, talking to Laura, an older woman in our group. She was coming down with something and suggested I join her in “sitting this one out.” She sat down on a ledge and I was tempted to join her, but no – this was one of the places I most wanted to see!

A friend of mine who is really into ancient Egypt told me that Hatshepsut was her “favorite queen” so, curious, I read up on her. Hatsheptsut of the 18th Dynasty was the most important woman ever to rule Egypt. In fact, female rulers were exceedingly rare. She was brought up to be self-confident and she was also ambitious. Already queen, having been married to Thutmose II, and stepmother to his successor to the throne, Thutmose III, she acted first as regent when he was first named as ruler – the boy was only about three or four at the time. As he grew and learned more about the duties and responsibilities of a king, she continued to rule alongside him and declared herself pharaoh, an unprecedented move for a woman.

As a girl, Hatshepsut had been well educated and taught to perform religious duties, and as queen she became “God’s wife,” the most important role a woman could normally have in ancient Egypt.

Instead of waging war to expand Egyptian territory like her male predecessors, she chose to consolidate the country, built monuments and organize expeditions to the land of Punt to bring back myrrh, incense and offerings for the gods – and a tree. 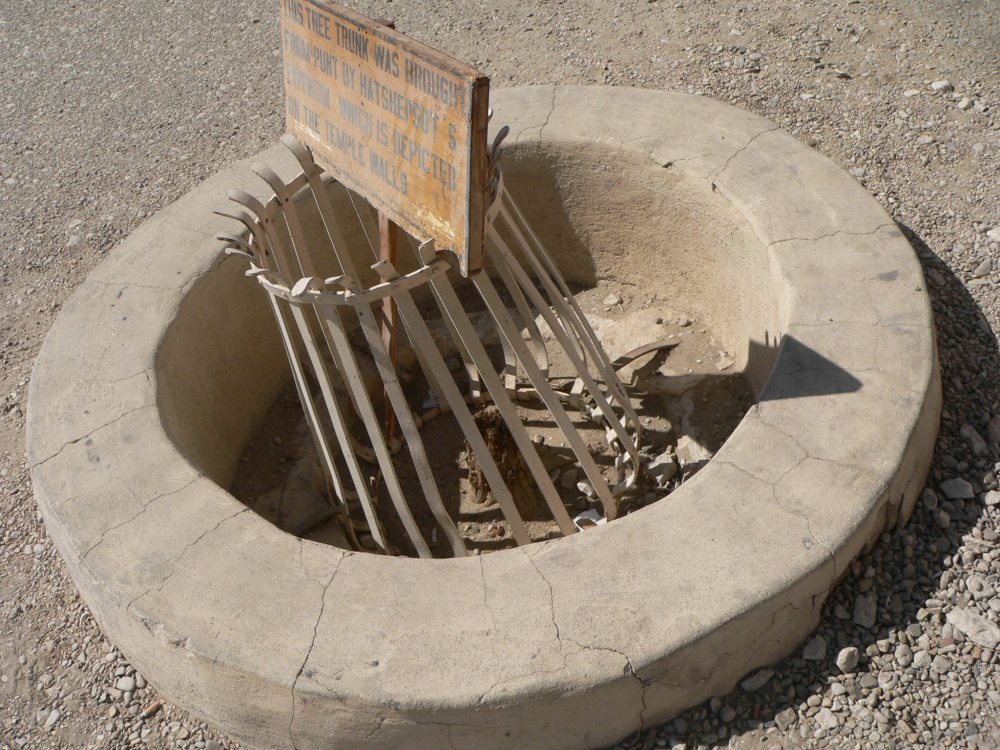 The reliefs inside the first colonnade are damaged and we didn’t go into the lower level, but they include a detailed scene of how the queen’s granite obelisks were transported on boats from Aswan to Karnak.

We took the ramp up to the second court. On the left is a chapel dedicated to the goddess Hathor.  The tops of the columns are carved in the shape of a face of Hathor as a woman, with cow’s ears and a sistrum on top.  (A sistrum is a musical instrument of ancient Egypt used in many religious ceremonies, especially those dedicated to Hathor. It consisted of a handle and a metal frame with crossbars that had small rings or loops. When shaken it makes a jangling sound, like the modern tambourine which has largely replaced it.) 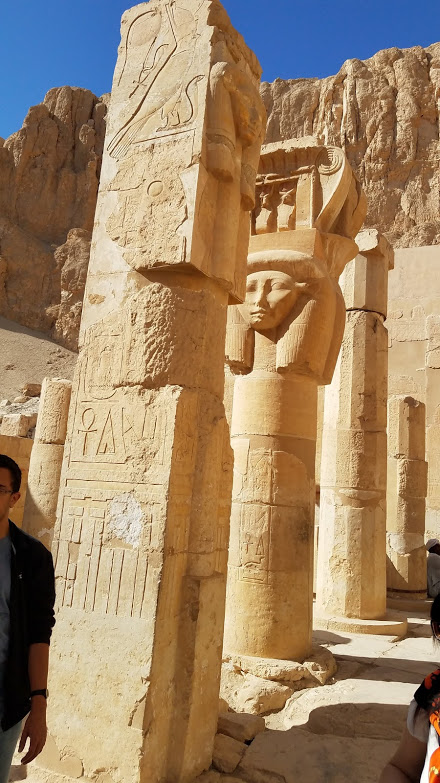 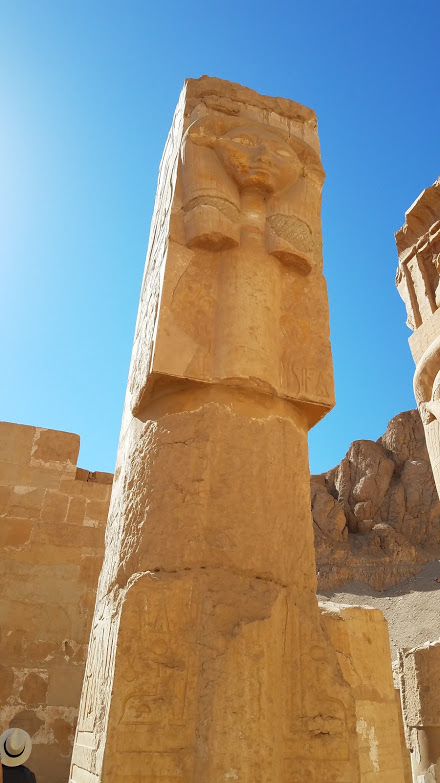 To the right of this chapel is the second colonnade. The first half commemorates expeditions to Punt (scholars are not sure exactly where Punt was) and show the many products brought back from Punt. 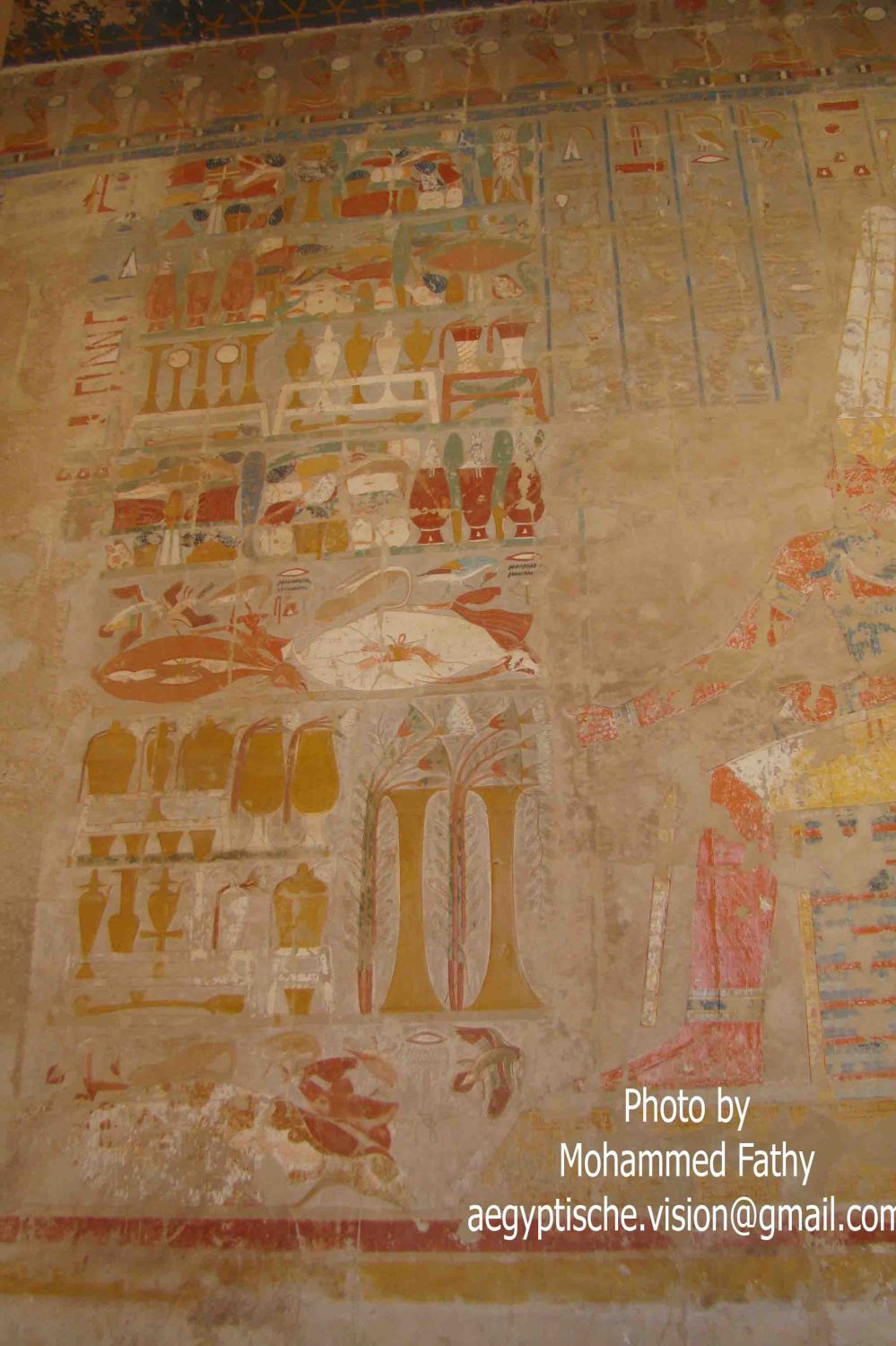 On the right is the colonnade celebrating the divine birth of Hatshepsut. Showing that she was of divine origin legitimized her reign. 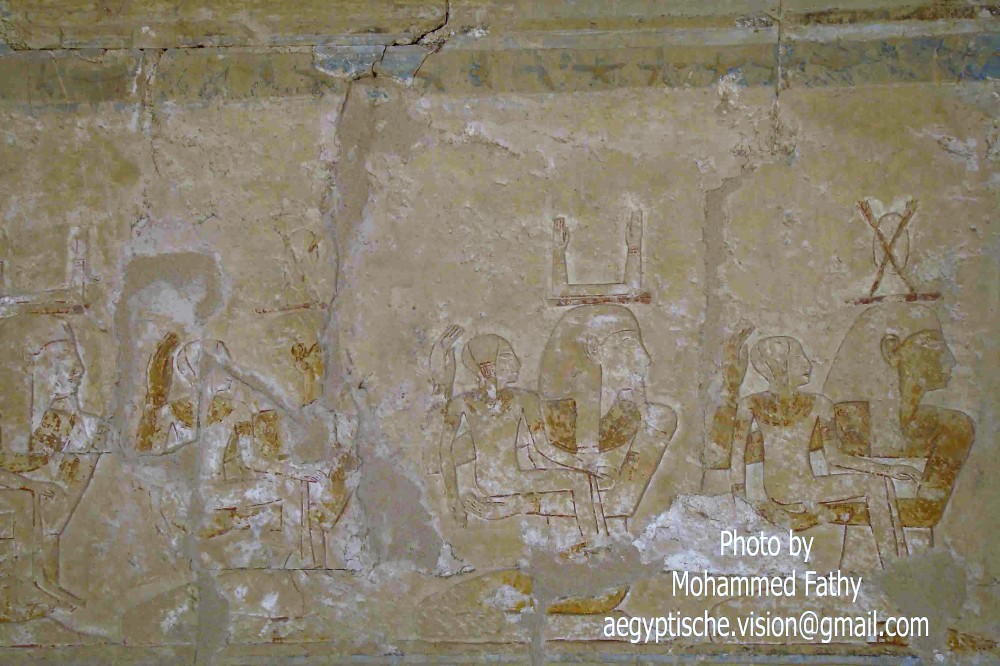 On the right of the 2nd terrace is the better preserved chapel dedicated to Anubis, the god depicted as a jackal, who ushered souls into the afterlife and was the protector of graves.

The third terrace is reached by another ramp flanked by two statues of Horus.

In front of the colonnade is a row of statues of the pharaoh. They are generic in terms of facial features, including the false beard portrayed on many such statues. 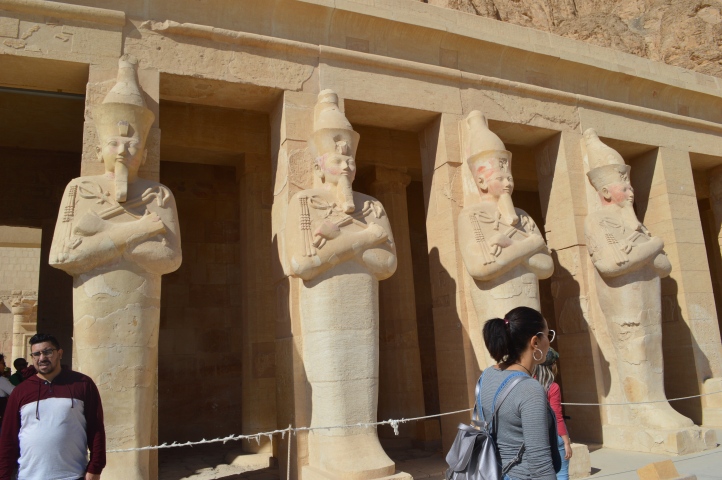 In the hypostyle hall are carvings showing priests carrying barques with statues of the gods and the pharaohs followed by musicians and dancers. These barques represent the connection between the living and the dead. 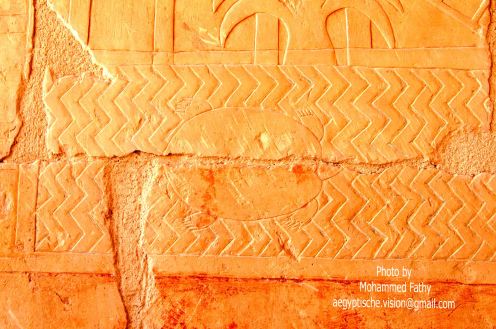 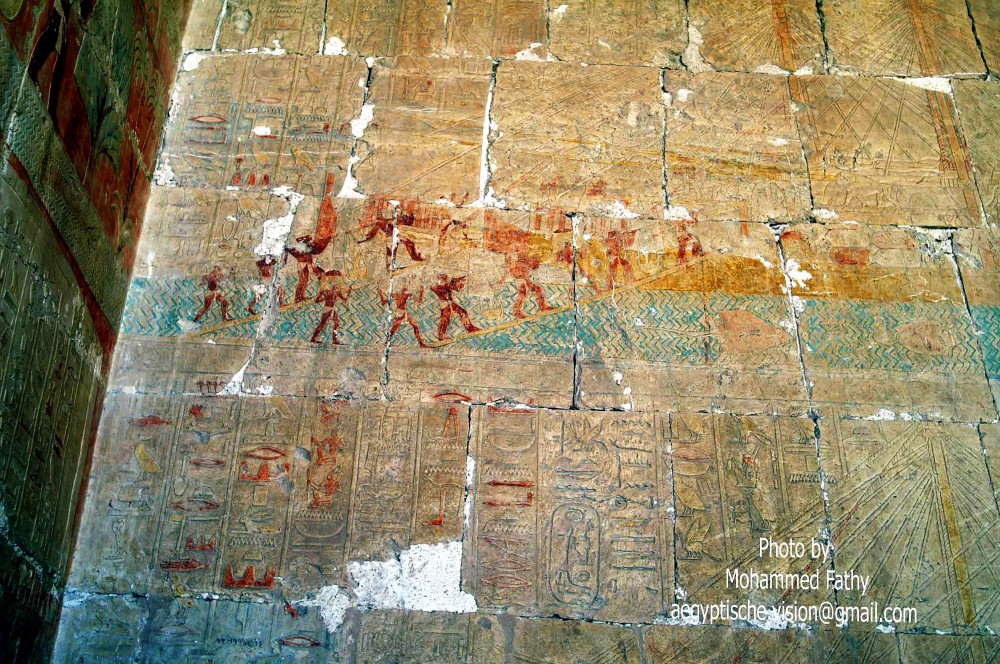 At the back of the third terrace, cut into the rock cliff is the sanctuary of Amun, the “Holy of Holies” where Amun’s boat would rest awaiting the next day’s festivities. 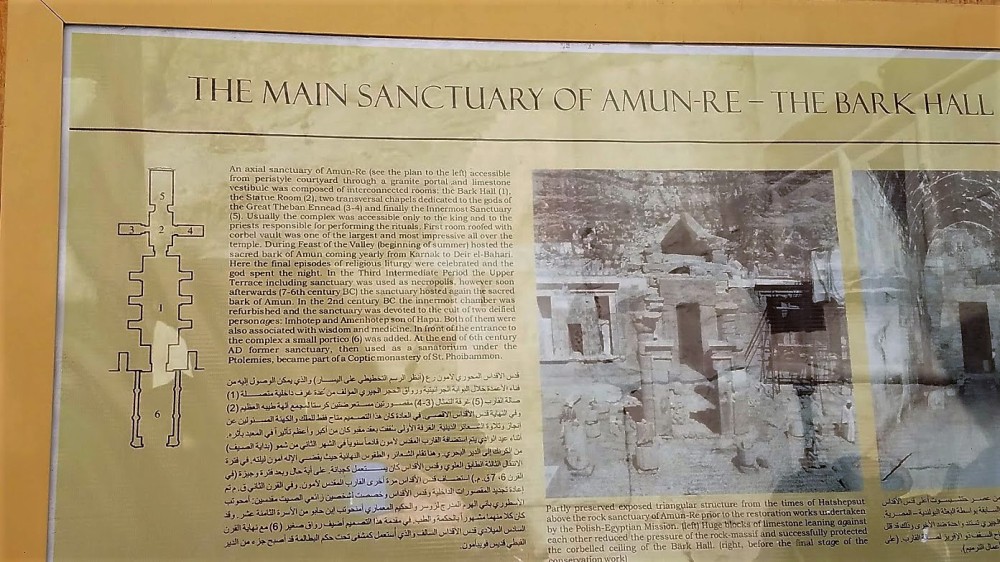 Here is the third court as seen from above. In the lower part of the photo is the entrance to the Sanctuary of Amun. 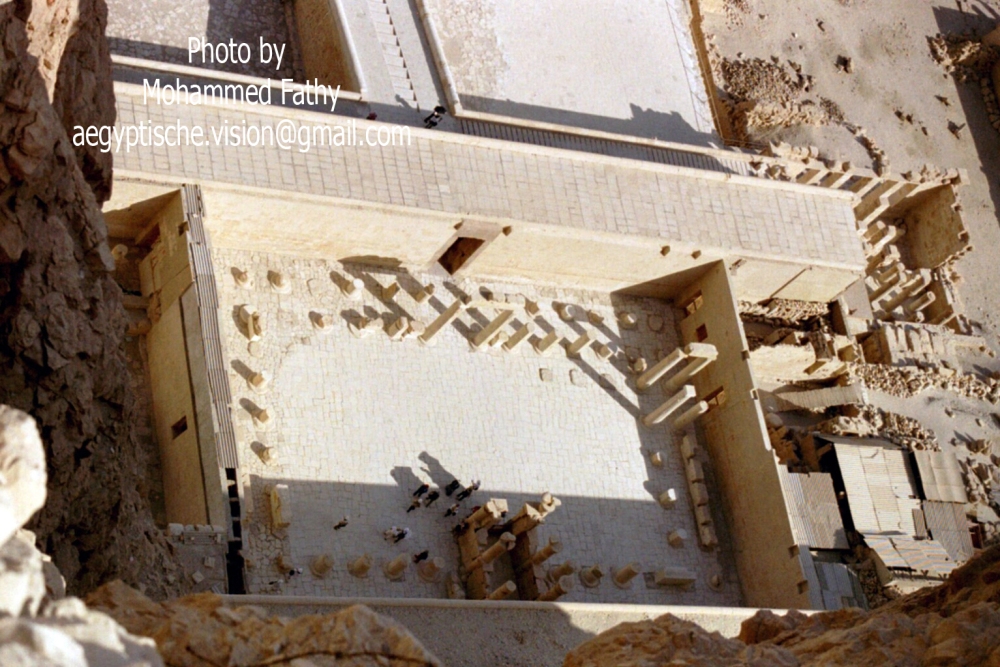 Although he apparently bore no ill will toward her, upon Hapshepsut’s death (apparently from an abscess after extraction of a tooth!) Thutmose III went about erasing his stepmother’s name from all monuments and expropriating her temple to honor himself and his accomplishments. So thoroughly was her name and image erased from ancient Egyptian records that her existence was unknown until the 19th century! Thutmose III did this to assert his power as ruler and he even backdated the beginning of his rule to the date when she became regent during his early childhood.

Upon leaving the Temple of Hatshepsut, we briefly visited the colossi of Memnon. These statues of the seated pharaoh Amenhotep III rise over 50 feet tall and are the main vestiges of his mortuary temple. Alongside the legs of the colossi are standing figures of the king’s mother and his queen, Tiye. Tiye and Amenhotep III were the parents of the “heretic” king Akhenaten (whose name was Amenhotep IV before he changed it to honor who he believed was the one and only god, Aten), and the probable grandparents of Tutankhamen. 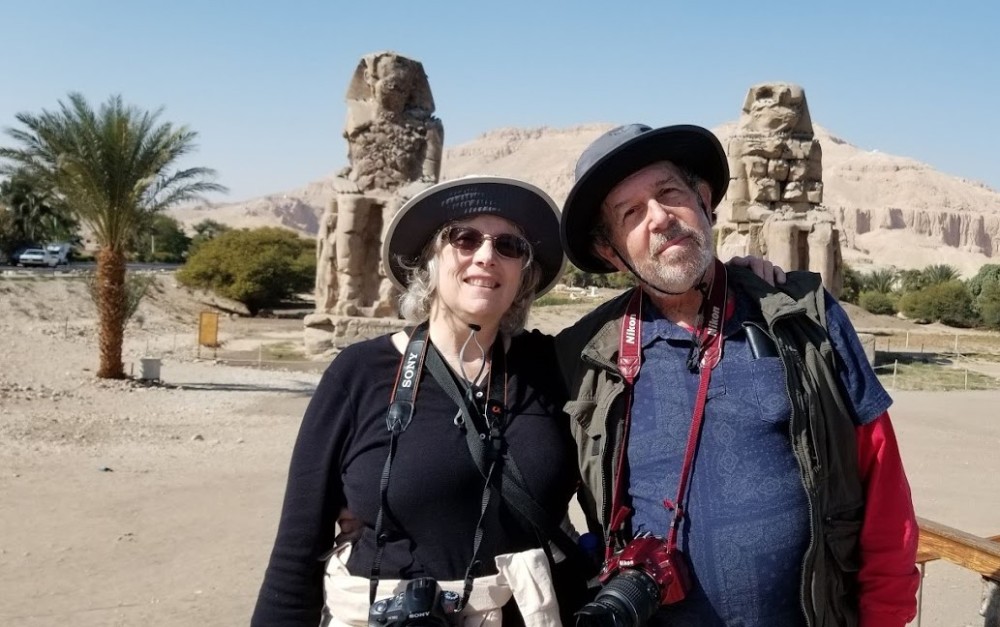