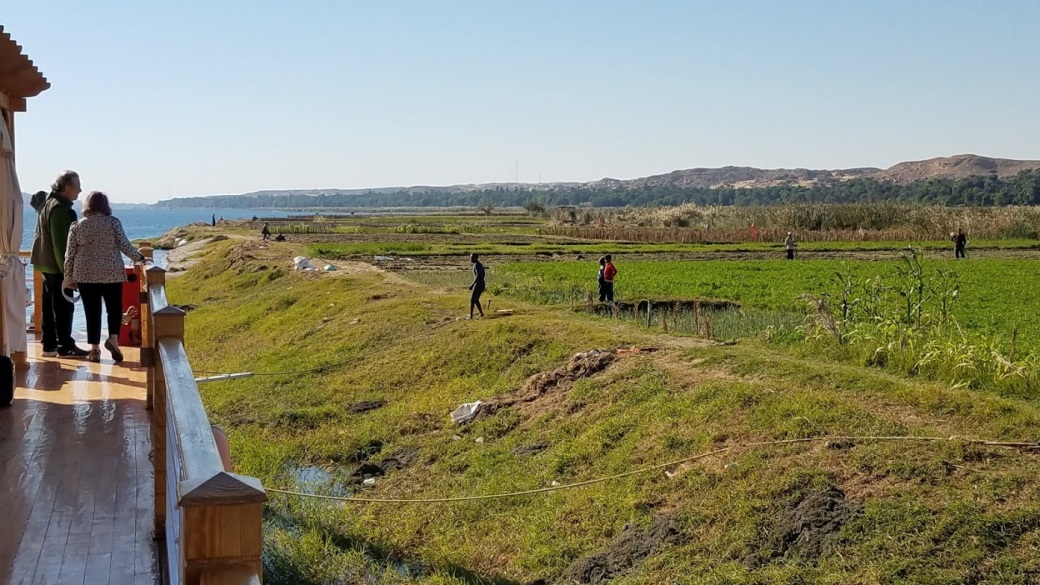 On our third day of our Nile cruise on board the Aida, we had a leisurely day enjoying our cruise and visiting a farm family on Besaw Island. 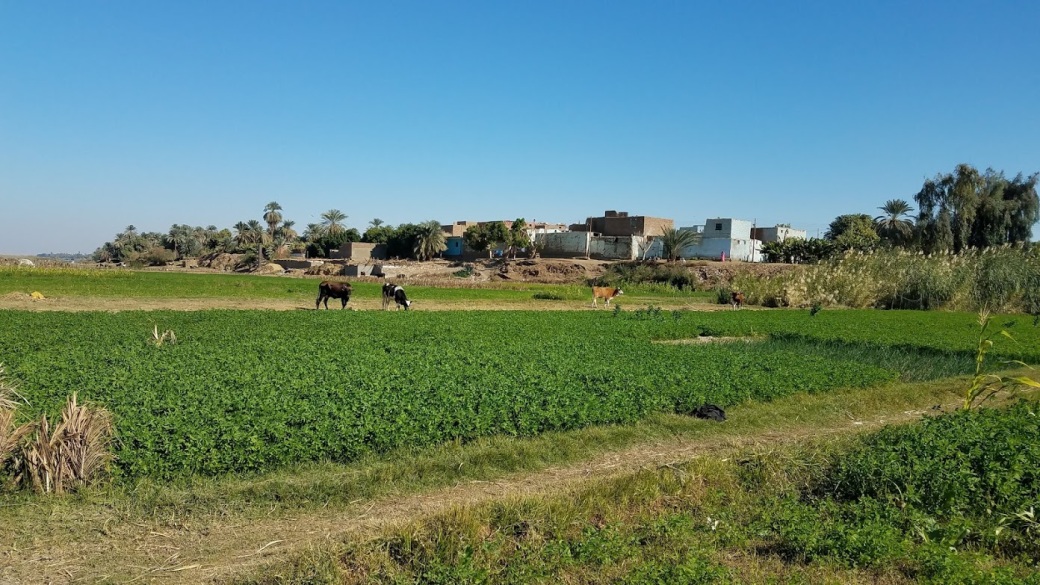 Sayeed is an attractive 35-year-old, intelligent, and thoughtful man. He was as curious about us as we were about him. After showing us around the farm where he works and a banana plantation, we went to his house where we introduced ourselves and then, by asking him questions, we had a lengthy discussion on a variety of topics.

The farmers on Besaw Island own their own land, a result of agrarian reform during Nasser’s regime when land previously owned by wealthy landowners was redistributed among the people who worked the land.

New plantation – these “winter” crops are protected from wind and sand by rows of stiff, dry palm branches.

Sayeed doesn’t own any of the banana plantations on the island, but we stood among the banana plants for awhile, exchanging information on how bananas grow, how Americans get their bananas, the use of pesticides, natural vs chemical fertilizers, and genetic engineering done by large agricultural interests in the U.S. He and his nephew who accompanied him seemed very interested in the information we gave them. 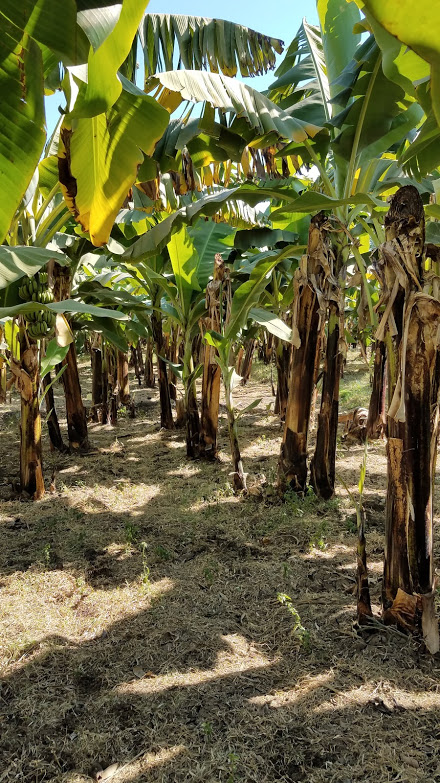 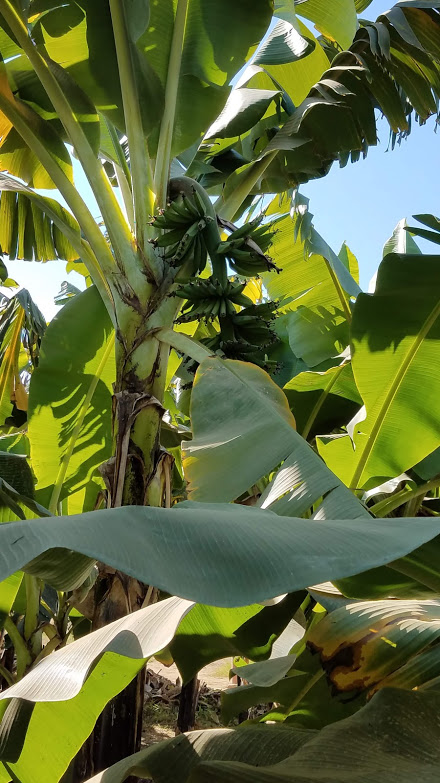 Sayeed is married with children (I don’t know how many); his wife Zena is 31. Lots of discussion occurred at his house about politics and education.

Sayeed admires some American presidents (all Democrats), especially Jimmy Carter, because Carter negotiated peace between Egypt and Israel. We told him that Carter is now in his 90s and has an organization called Habitat for Humanity, which builds houses for poor people. Sayeed replied that a person shows good character – what kind of a person he is – by his actions.

We touched on Trump, most of us saying we don’t like him, but soon got off our opinions and talked in general terms.

On the topic of education, Sayeed told us there is a primary school on the island and a middle school. To attend high school, kids have to go to the mainland. More boys graduate from high school than girls, because more girls drop out to get married. Sayeed said that his daughter can go to high school if she wants to. He also said that if any of his kids wanted to go to college in the U.S., that would be fine, because afterward they would return to Egypt. Sayeed and his brothers all finished high school, but his sisters only completed middle school.

He was curious about whether students study Arabic in the U.S. I explained how bilingual education works, that there must be 20 students in the same language group to have instruction in their native language. (Most often, this is Spanish, but there are a few districts in the Chicago suburbs that have Arabic. Mainly American students can only study Arabic in college, but there are also private programs younger students might attend after school or on weekends to learn about their language, culture and religion – many are run by religious organizations or connected with a local church or mosque.)

Dale, Cary (with one of the children on her lap), Sayeed

On the topic of daily life and division of labor, Sayeed said that children don’t have to do chores, but usually when they get a little older, boys will help their dads on the farm and girls help their moms with housework. It is always OK to help Mom out, whether girl or boy! There’s a decent sized grocery store on the island, but more often families will go shopping about once a week on the mainland. Sayeed is proud of being Egyptian, because there were two important ancient civilizations: Egypt and China.

Several of the women in our group went in to help. All the bowls and dishes were set on a cloth spread on the floor, individually set out for each of us! A couple of women in traditional dress sat on the floor while one other was standing, and she began handing us the bowls of soup and other plates. Considering the number of bowls and plates (we were 14 guests, so that’s 14 bowls and 14 plates), it would have taken the women quite some time to serve all of us. As it was, they smiled and nodded their gratitude for our help, and soon everyone was enjoying their soup. That was followed by a lot more food!

At the entrance to the kitchen, there is a door painted green and decorated with flowers and hearts in white and yellow. In one of the hearts, the initials of Sayeed and his wife Zena were written. It looked as though this had been done by a family member when they got married. It was really beautiful! 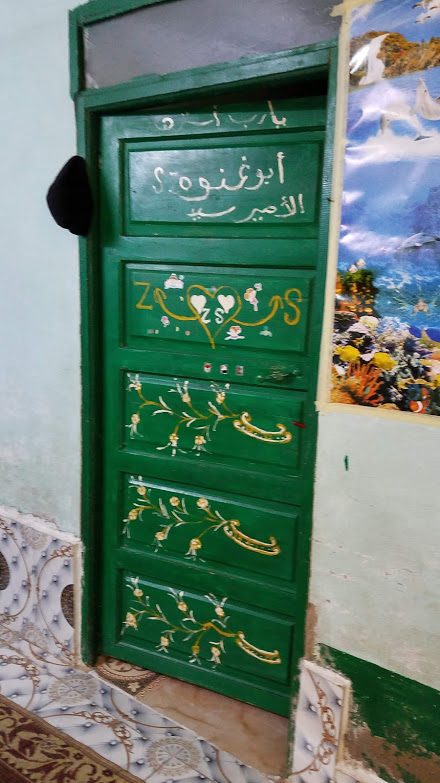 After our meal, we said our good-byes and thank yous and headed back to our ship. The children from the village that had greeted us on the river bank and followed us through town were there to accompany us back again! I imagine they don’t often get visitors – tourists – who come on small ships, so it must have been an exciting day for them. They waved at us enthusiastically from the shore as the Aida pulled away back onto the river. 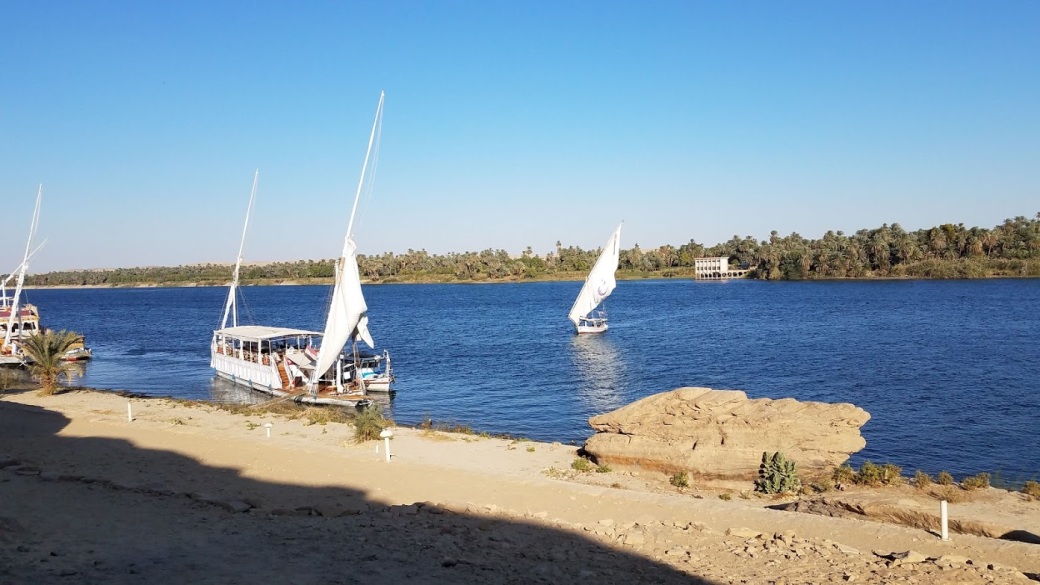