Here are my answers to Melanie’s Share Your World this week.

(the last two are courtesy of Teresa of The Haunted Wordsmith)
1. Is it wrong to sell store-bought pastries at a bake sale?
No, not if you acknowledge that.
2. Have you ever interacted with the police?
Yes, I have gotten a few tickets – in the days before cameras were installed to catch people speeding, etc. w

hen the cop actually stopped me in person to tell my I was over the speed limit. I also have had “conversations” with police officers who called about my son or came to my house to bring him home, mostly regarding acting erratically or possession of marijuana. I dreaded those interactions!

3. What will you remember most about this past year (this question will show up again, in late December, just FYI)
The wonderful trips my husband and I took – to Egypt & Israel in Dec. 2018/Jan. 2019 and to Europe in June-July 2019.

Also the embarrassing and shameful behavior of our so-called president, Trump. It never gets better and his lies just keep mounting. I think lying is default with him – it’s so natural to him that it’s the first thing that comes out of his mouth. The Mueller Report – which everyone seemed to think was anti-climactic because he refused to indict Trump but in his hearings last week he made it clear that he considered Trump guilty. Every day Trump says something outrageous – either racist or defending some of the sleaziest characters in America.

4. Is it better to have fungus on your toes, your tongue, or your pizza?
None. Mushrooms are a fungus, and often found on a pizza, but I am not fond of them. But at least on a pizza, I can pick them off. 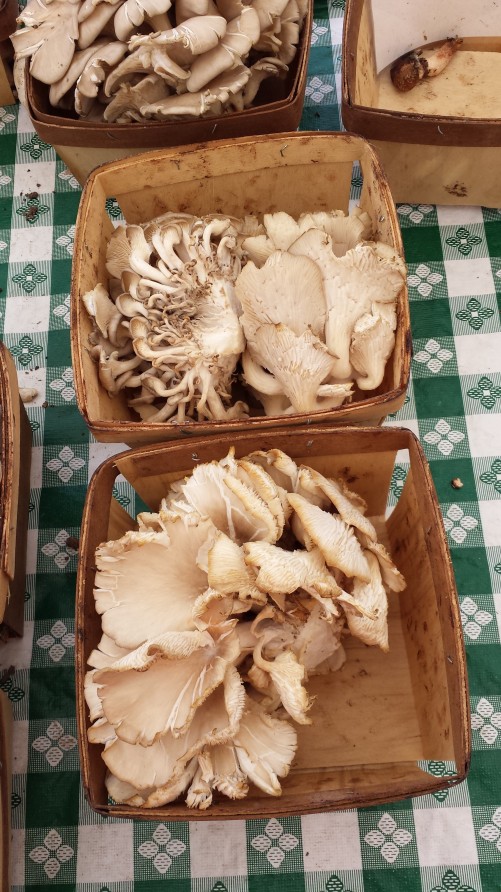 5. What is one slang word that makes your skin crawl?
I have two:
I have never approved of the word “suck” to mean awful or terrible, yet I occasionally say it myself now because I am so used to hearing it in everyday speech.
The word “like” used several times in a sentence or to denote someone’s speech or reaction to something – it’s so lazy. Can’t people come up with a more descriptive word for a reaction to something – “I was like…”? Or what’s wrong with the word ‘said’? “I said I couldn’t believe he did that” is proper English; “I was like, I can’t believe he did that” is lazy and so – teenager-ish, yet people keep saying it well into adulthood. But once again, it has become so pervasive that I hear myself using ‘like’ that way myself. UGH!!

Something I am grateful for this week…
My son was in a serious car accident, which completely wrecked the front of his car, but thank God, he was not injured, nor was the other driver involved. I am grateful for the airbag that probably saved his life!

I’ve been busy the last few days and unable to participate in Becky’s Square July Blues.
So to make up for it (just a little!) I’m posting three blue squares today -all taken in the Netherlands in late June of this year. Known for its Delft china (which is also blue), Holland is also a country very much connected to the water. This is where the Rhine River ends, and there are many canals, rivers and bogs. In fact, most of the Netherlands is below sea level, which is why they had to build dykes. Boating and river-based sports are naturally popular, and cities grow up around waterways.

The first blue square photo was taken on a private canal tour during our four days in Amsterdam. Sleek modern buildings are not what come to mind when one conjures up an image of this city of canals and bicycles, but there are many such buildings, especially on the far side of the river, like this one. The Rhine River widens here as it flows to the Atlantic Ocean.  Blue water, blue building, blue sky!

Our 2-week Viking river cruise began in Amsterdam on June 25 and wound along the Rhine, the Main and the Danube rivers. The next photo is of Nijmegen, a city in the south of the country. 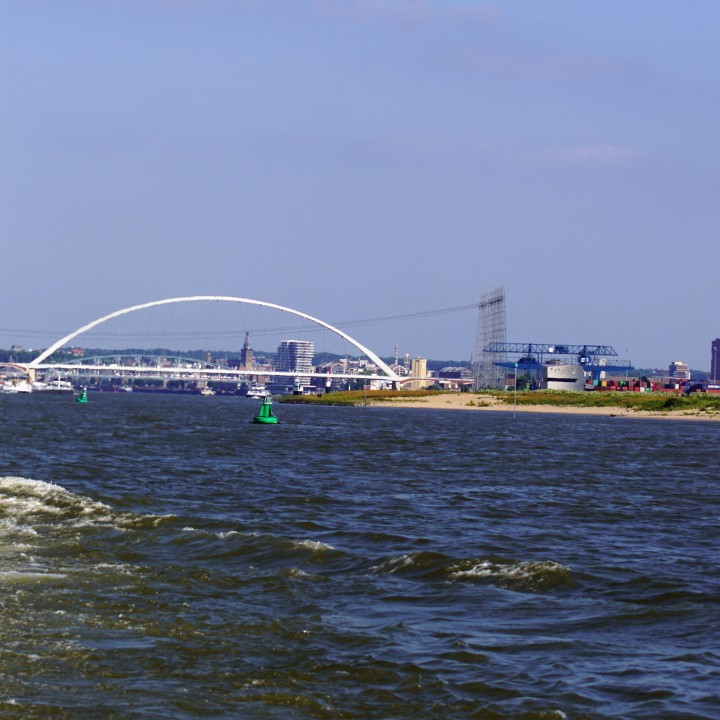 There is a lot of boat and ship traffic on these rivers, not only popular for cruises but also to transport freight and leisure for the locals. This photo was taken on the cruise, somewhere between Amsterdam and Nijmegen. As a special touch, this photo has a blue square within a blue square! 😉

Climate change was very much in evidence in Europe in June and July this year. Just a few days ago, a fierce heat wave sent temperatures soaring to record highs in many countries unused to extreme heat (Paris broke all-time records on July 26 with an afternoon high of 109ºF/43ºC!). Although places of business often have air conditioning, most people live in houses or apartments without air conditioning because they so seldom have needed it.

An earlier heat wave (not as extreme, but it lasted longer) hit while we were in Amsterdam. Our Airbnb didn’t even have a fan! However, usually it would be cool enough with a balcony in front and another one in back creating a cross draft. Fortunately, two days after the heat wave started, we were on a Viking river ship, where all inside areas have air conditioning.

We saw many scenes like this as we cruised up the Rhine River. And it wasn’t just people!

Cows also know how to “chill” when it’s hot!

Now “chill out” with this golden oldie, Heatwave by Martha Reeves & the Vandellas!

This is my entry for Becky’s July Blue Squares and also for Nancy Merrill’s A Photo A Day with the theme of Unexpected.

It was not until I had my zoom lens focused on the top of the blue house in Cologne (Köln), Germany, that I saw what the guide had been telling us about as she pointed upward. Something about the residents of this neighborhood wanting to do a community project but local politicians would not honor their request by giving them funding.

So one of the residents commissioned a little sculpture, way up high on this building, of a person mooning – to show the politicians what the frustrated residents thought of them!! Unexpected, to be sure – I wonder if any politician ever noticed it? 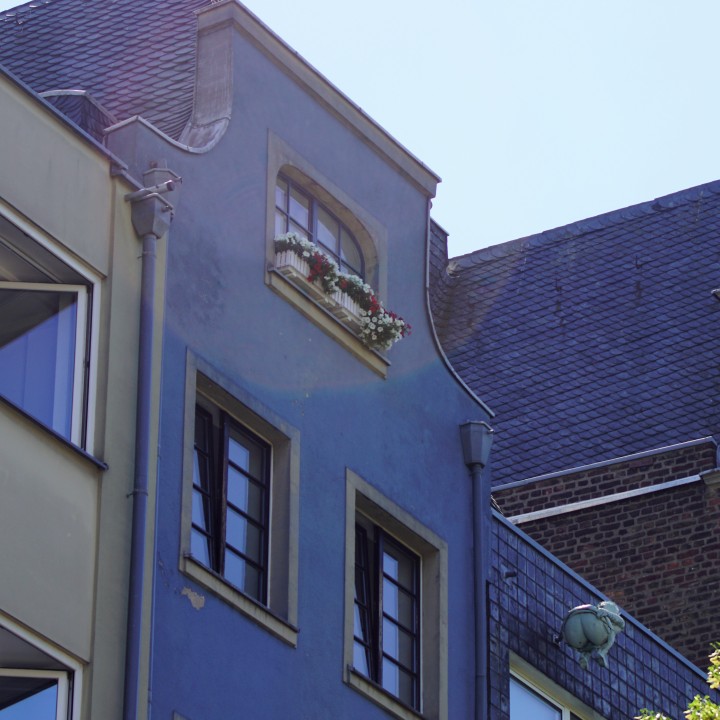 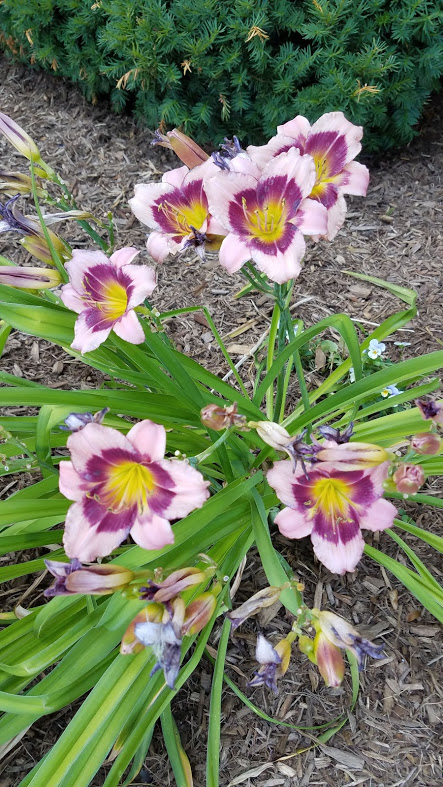 Doors in Cabourg and Arromanches, France

The first photo is my entry today for Becky’s July Blue Squares. All are my contribution to Norm’s weekly Thursday Doors feature. The first three were taken in Arromanches; the rest were captured in Cabourg.

Cee’s FOTD 7/25/19 has some beautiful photography! Here’s my contribution.

My entry for Becky’s July Square Blues today was taken at Omaha Beach in Normandy, France.

This is the 75th anniversary of the Battle of Normandy, which lasted 100 days.  But it all started on D-Day, July 6, 1944, when the secret organized invasion of northern France via the beaches of Normandy took place, orchestrated and led by General Dwight D. Eisenhower. Thousands of troops waded ashore, parachuted from the sky, arrived in warships, tanks, etc., facing fierce resistance from the Germans in the form of a sea wall, hazards placed on the beaches, mines scattered along the landing area, and German tank guns. These flags represent the participating nations in that operation, though the three most important Allied forces on D-Day were Canada, Britain and the United States.

For Cee’s FOTD 7/24/19, I am also posting delphiniums (her post reminded me of them!) that I saw at the Chicago Botanic Gardens in May.

This is the larger display of delphiniums. The ground cover flowers are foxglove.

I’m pretty sure I have posted these photos before, but this time I am posting them for today’s Blue Square entry. Dome of the Rock is such a beautiful building, known mostly for its golden dome that stands out among the whitish buildings of Jerusalem’s skyline. However, close up, it is covered with Arabic mosaic tile designs.

Disappointing was the fact that we could not enter this building, which is a sacred site for the three monotheistic religions of Judaism, Christianity and Islam. Inside the building is a rock on which Abraham allegedly stood, ready to slay his son Isaac as a fulfillment of God’s test, but God stopped him. It is also allegedly where Adam, and later Cain and Abel, offered sacrifices to God. We cannot enter because only Muslims are allowed inside. The building is actually owned by the King of Jordan, but Jerusalem’s Muslims maintain and care for it. It is part of a complex of buildings on Temple Mount, the other being the Al-Aqsa Mosque.

Dome of the Rock is the first monument we saw on our tour, in January 2019, of Old Jerusalem beginning at Temple Mount, the square where the First and Second Temples once stood. All that remains of the Second Temple (which was destroyed by the Romans during the Jewish revolt in 70 AD) is the Western Wall, known also as the “Wailing Wall.”

Blue predominates in the mosaics of Dome of the Rock’s façades. A stripe of Arabic writing, white on blue, runs around the entire exterior walls of the building. Underneath are a number of different designs, including more Arabic writing, as can be seen in this close-up photo of one section. Each of the arched sections has a different pattern.

More information about the Second Temple and its destruction can be found at The Destruction of the Second Holy Temple: A Historical Overview.

Photographed during a walk in my neighborhood and posted for Cee’s FOTD 7/23/19.