A lot of my photos lately (only with my cell phone, unfortunately – I don’t generally take my big camera on walks with me) have been taken at “West Lake” – which is more of a pond, but here at our senior community it is called a lake. In these pandemic times, the most active scene around here is at West Lake (and sometimes East Lake, which is even smaller), with a variety of water birds engaged in their daily activities, oblivious to pandemics, lockdowns, and social distancing.

If you watch long enough, or happen to be there at the right time, life dramas may unfold in front of your eyes.

About 10 days ago, staff members from our community “escorted” a duck family from a nearby school (where apparently the duck goes to nest every year, only this year, no one is there to provide food and water for her & her chicks) to our campus.  I wasn’t there to witness this, so I don’t know how many ducklings there were at the time, but by the time I saw them, there were merely two wee ducklings – and they were REALLY small! I took this photo of the little family and was surprised to see daddy duck still hanging around, which isn’t common for ducks. The tragedy is that, while I haven’t seen them lately, I’ve been told there is only ONE duckling now!

There is actually what I call a “bachelor club” of drake mallards, about 7 or 8 of them, since the females are off nesting somewhere.  So perhaps we can look forward to seeing more duck families soon.

We also had two families of Canada geese – here is one of them. Note Sidney (“Duke” as he’s officially named), West Lake’s male swan, lurking nearby looking threatening.

And here comes the drama – Sidney’s mate, Celina (“Duchess”) is currently sitting on her five eggs, which should hatch within a week from now, and Sidney is determined to claim the entire lake as their own.  Here he is chasing one of the geese out of the pond.

Unfortunately, the above family met a tragic end – Sidney killed every one of their goslings! Another walker from our community told us she had seen him kill one of the babies. And we saw one of the bodies floating in the water…

Although Canada geese are a nuisance, I was glad to see that there is another family on campus, which wisely hangs around East Lake, where the swans (who are not nesting parents-to-be) leave them alone.

We often see one or another of two visitors to the lake – a heron and an egret. 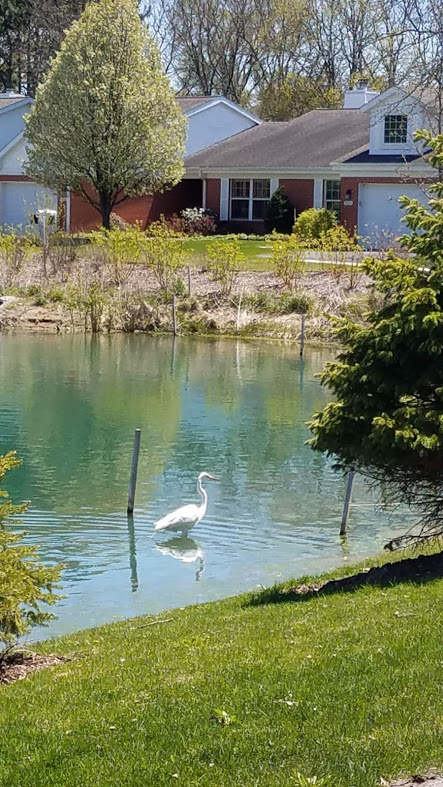 Dale and I had a discussion about whether the above was an egret or a heron. I thought it was too large to be an egret, but Dale said its color and black legs indicate it is an egret. It turns out we were both right – egrets are a type of heron, and this is evidently a member of the “Great White Egret” species.

This is unmistakably a great blue heron, and it often visits our lakeshore.  We try to be very quiet to get close, but both the heron and the egret always fly away to the other side of the lake before we get very near. 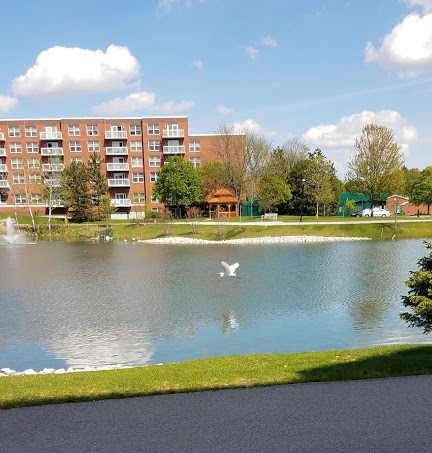 I suppose I will have to tough it out and lug my camera around with me, since the cygnets should be arriving very soon!