SPOILER ALERT: THIS REVIEW CONTAINS SPOLERS!  I am including this entry from my personal journal in May for Sam Bishop’s When Are You Reading 2018 Challenge. 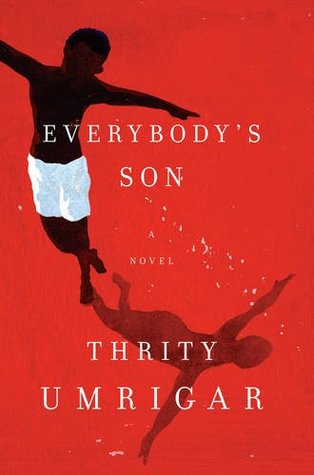 This morning I finished reading Everybody’s Son by Thrity Umrigar. I give it 5 stars for its insightful presentation of the dilemmas of race, class, and politics in our society. Chapter 40 (the last chapter) is the best – a culmination of everything, I guess.

The story starts with Anton, a 9-year-old mixed race boy, trapped in a hot apartment during a heat wave. He doesn’t know his father or even who he is; his mother left to buy crack from her dealer, saying she’d be back in half an hour, locking the door from the outside, presumably to protect her son. But she doesn’t come back and after a week, he breaks out of the apartment by hurling a chair through the window, climbs out and cuts his leg on the jagged glass.

He limps down the street, looking for help, looking for his mam. He is picked up by authorities and taken to Children’s Services. He is placed in foster families – the first one doesn’t work out, but the second one is a childless white couple who lost their teenage son five years before in a car accident. They take in Anton and grow to love him. David (the father) is a judge with considerable influence in the community.

Meanwhile, Anton’s mam is arrested when she is found in a crack house. She apparently had been raped by her dealer who then kept her high and semi-conscious for several days. Whenever she was conscious, she asked after her “baby boy.”

Anton is eventually adopted by the white couple and grows up with every advantage of an upper-middle class family. But to do so, David pulls some strings to extend Anton’s mam’s prison sentence and then persuades her to give him up altogether. Anton goes to Harvard Law School and becomes a judge himself. Eventually he wins election to Attorney General of the state and runs for governor.

The author presents the dilemmas of race and class as Anton goes through his life, occasionally clashing against racial stereotypes, emotional traumas and activism, the stresses of a political career, and eventually when he goes to Georgia to look for his birth mother. In the South, he encounters racism as he never had experienced before growing up in the Northeast, and finds out who he really is. In a way, one could say this is a coming of age story.

The story is written primarily in 3rd person singular, mostly Anton’s point of view, but one chapter – the one about 9/11/2001 is written in 3rd person plural, conveying a collectiveness, a unity in what Americans of all races and classes felt on that day. Another short chapter is only one sentence – using “after” as a separation and linking of clauses, giving a feeling that the events happened very fast.

Good quote: (p. 298) “But now he knew the truth. There were no adults. There were just tall children stumbling around the world, walking pools of unfinished hopes, unmet needs, and seething desires. The unsuccessful ones ended up in asylums. The ones who learned to masquerade those needs became politicians.”

I am blogging my notes on books in order to participate in a reading challenge called When Are You Reading 2018. This is not a book review. My “notes” on books usually are more like rambling thoughts. I wrote this in my journal on May 17, 2018:

I hate extreme cold weather and therefore am sort of fascinated by the kind of people who would choose to work in Antarctica, when even in the summer, the temperature hovers around -40°F. I wrote some notes, (POSSIBLE SPOILERS) most of which are quotes:

p. 122 “The urge to jump affirms the urge to live.” This is called the high-place phenomenon, when we experience a strange urge to jump overboard or off a high place when we look down. It is the brain’s misinterpretation of the instinctual safety signal.

p. 179 Sal gets upset when Cooper asks how the universe started. Sal’s answer concludes with “That may work in art, Cooper, but that doesn’t work in the real world.”
This is an insult; although she didn’t take it as such, I did. It’s this attitude by scientists, politicians and others who see art as outside the real world. Of course, the imagination figures into the creation of art, but what art is IS part of the real world.

p. 298 (Chapter narrated by Frank Pavano) “Democrats…would…dig into my past and reveal the plagiarism charges…It was part of the narrative, and that the mainstream media’s refusal to allow me, a man of faith, to be “born again” would only increase the public’s support. Again and again, the media underestimated the importance of the lost lamb to the churchgoing American.” (Emphasis mine.)

At first, I agreed with the idea that “intelligent design” scientists should have equal opportunity to research funding – why not? If they’re wrong, the research will show it. But in the chapter on Pavano (pp. 282-300), in which manipulation invades the scientific method, part of the “Plan” was to manipulate the data if it didn’t support their hypotheses (and their political agenda). So perhaps the South Pole scientists were right to refuse to cooperate with a researcher supposedly sent in the name of science to the South Pole to do research to support the conclusion that “intelligent design” (i.e. a universe created by God) is correct.

At the end of the book, I was surprised to find out that Sal’s hypothesis about the universe being made up of membranes which occasionally run into each other and create new universes, was proven wrong; he did not believe in the Big Bang theory. Yet ultimately his research supports the “inflationary” theory of most other scientists. He, as a ethical scientist, owned up to this and did not try to manipulate the data. Anyway, I was surprised because his hypothesis sounded plausible to me and I thought perhaps in the last 15 years or so, when I have not kept up with prevailing scientific theories about the origin of the universe, this idea of “branes” might be correct. Isn’t that like string theory?