Cee’s Fun Foto Challenge is ending its series exploring color this week, with the theme 4 or more colors in one photo!
Holiday lights

Cee’s Fun Foto Challenge has a series focusing on songs. This week the theme is It’s a Small World.

“It’s a small world after all”

“There is just one moon…

…And one golden sun”

“And a smile means friendship for everyone.”

For Jude’s Travel Words, Life in Colour, this month’s word is the color purple.

A more vibrant shade of purple are these rhododendrons.

Purple in sunrises and sunsets (sunrise in Tanzania, sunsets on Chicago expressway and the Caribbean Sea)

I’m back at Tourmaline’s Countdown to Christmas. Let’s see, where was I?

Day 19: Mail
I almost always send holiday cards through the mail. Usually they are late, but this year I’ve mailed them all before Christmas! I order my cards from Shutterfly and couldn’t imagine what to send in this coronavirus year! The one I chose was amusing & appropriate, I thought – it just said “Well, That was CRAZY! Happy 2021 (finally)”. It included four photos, one a selfie of me and Dale in masks, one of Hazel, our cat, and two scenic. (I am unable to copy and paste it here and I used up all the cards!) I had Shutterfly print our return address on the back of the envelope, so sending them was easy! I only had to add my half-page letter, address, stamp, seal, and mail!

Day 21: Snow
We haven’t had any (yet)! But here are some photos from last winter.

Day 22: Night
Last night, for the first time in 800 years, Saturn and Jupiter were to line up in the night sky, and we would see them as one brightish light near the horizon. We were going to go to a park after dark to look at this phenomenon, but alas! It was cloudy!

What I like about night at Christmas time is all the holiday lights that brighten up the darkness when the days are short and the sun sets before 4:30 p.m.!

Cee’s topic for her Fun Foto Challenge this week is anything to do with cars and trucks.

Share Your World is a weekly set of questions hosted by Melanie at Sparks From a Combustible Mind.

QUESTIONS FOR THE WEEK 12-23-19:
Do dogs ‘talk’ (communicate) with their own species? (credit to Marilyn of Serendipity)
Not just dogs – I think the members of every species communicate with each other. It’s not necessarily with their voices. Dogs are known to leave their “calling cards” by peeing on trees and lawns. Doing this is like sticking a post-it-note up on a public bulletin board for all to see. Anyone who has a pet knows the different kinds of sounds they make. If my cat hears the sound of a cat fight, she is immediately on alert – her tail and fur on her back puff up. Dogs bark, whine, growl and make other sounds to express themselves; cats meow, caterwaul, purr and make funny, soft noises at animals outside; loons have a variety of calls. Many people have heard recordings of whale “songs.” So yes, I think dogs, like other animals, communicate with their own species as well as with others.

Have you ever had to work on Christmas Day?
No, fortunately not! I have never been in a job that requires someone to be on call all the time. Our daughter, whose birthday is on Christmas, is not so fortunate – I told her she was lucky never to have to work on her birthday, but in fact, she did used to when she had less seniority at her job as an apartment building manager.

If someone gifts you something that you immediately loathe, do you pretend to really like it anyway or are you brutally honest about your opinion?
I don’t loathe any gift and always try to show my gratitude for receiving it. I received, this Christmas, a gift from a friend – it is a small wood burning set. Original, I’ll give her that! She said it’s because I am “branching out” in my creative crafts – I’ve been drawing and painting more lately, that’s true. But don’t give me anything to burn! I will either cause an accident to myself or others, or at the very least mess it up. What I usually do with gifts like this that I have no use for is to keep them to give to someone else later, someone who doesn’t know the original gift giver!

Which popular drink, found during the Christmas season most often, is called “milk punch?”
Spiked eggnog perhaps? I have never heard the term “milk punch” so I’m just guessing.

How many ghosts show up during “A Christmas Carol?”
Four.

Are you all about the holly and jolly or more about remembering the alleged ‘true’ meaning of Christmas?
Both. Christmas, like other holidays, is a time for celebration with friends and family. So that’s jolly, at least among my family and friends. The holly – decorating. Yes, I do that. But I also always put up my main creche along with all the small ones I’ve collected from around the world. Right after Christmas, I put away all the wrapping paper and cards, but the creches stay up until January 6. This is a remember that Christ is the reason for the season.

Please share a memory or thought about the holiday season if you’d like, whatever kind of celebration you may observe.
In spite of my husband being Jewish (and we do light the menorah each night of Hanukkah), something we, like many people, do is the tradition of driving around looking at lights. We actually haven’t done this for a couple of years, but this year we did, just Dale and I. We moved during the summer so we now live in a different community, and we decided to check out the holiday lights of Arlington Heights.

The entrance to North School Park in Arlington Heights, which has a lot of things that are lit up for Christmas. 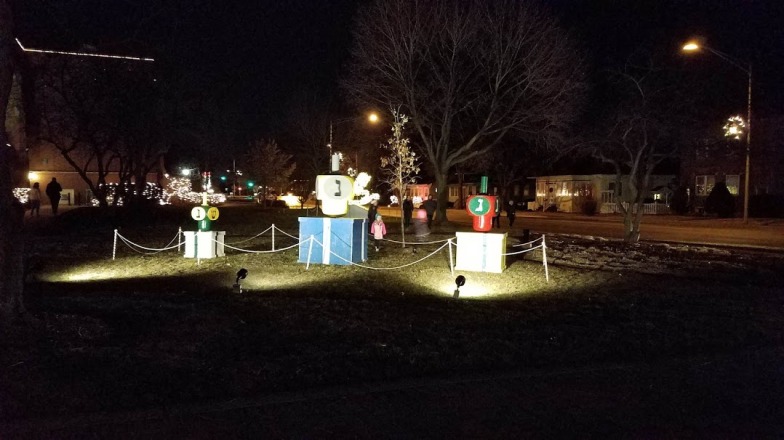 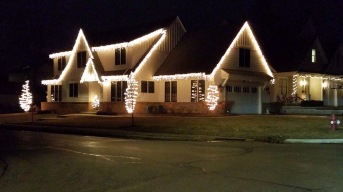 This house is near where we live and is really over the top! They fill their yard (in front and on the side) with those blow-up figures, of every type and description. I think they add more each year. This year, they had three dragons alongside their house! 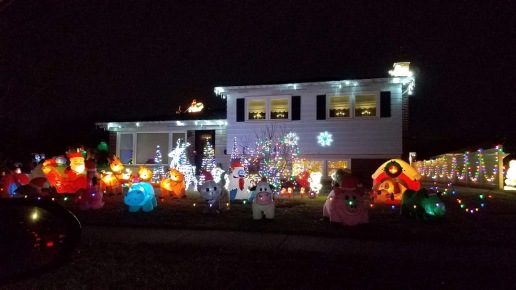 We (Dale, me, and our kids) used to always go to a neighborhood on the northwest side of Chicago called Sauganash, but after doing that for several years in a row, we realized that although the rich people who live there do decorate their houses and yards lavishly, they don’t change them much, so year after year we saw basically the same decorations and we stopped going there. While we are driving around, wherever it is, we tune our car radio to a station that dedicates about 6 weeks (just after Thanksgiving to just after New Year’s Day) to playing holiday songs, mainly popular tunes, not religious ones. We sing along with the ones we like and complain about how often they play the ones we don’t!

During my childhood, my family used to drive around our home town to admire decorations. There was one street that was famous for its original decorations, particularly one house, which did something different every year, so it was always a surprise. One year we went there and saw that that house had no lights up on the house, or any other decoration except a big lit up sign in the front yard that said SCROOGE. I’ve never forgotten this!