These works are in the permanent collection at the Art Institute in Chicago. A gallery dedicated to the impressionists contains works by Van Gogh, Gauguin, Cézanne and Toulouse-Lautrec.

First are three works by Vincent Van Gogh, one of my favorite artists! 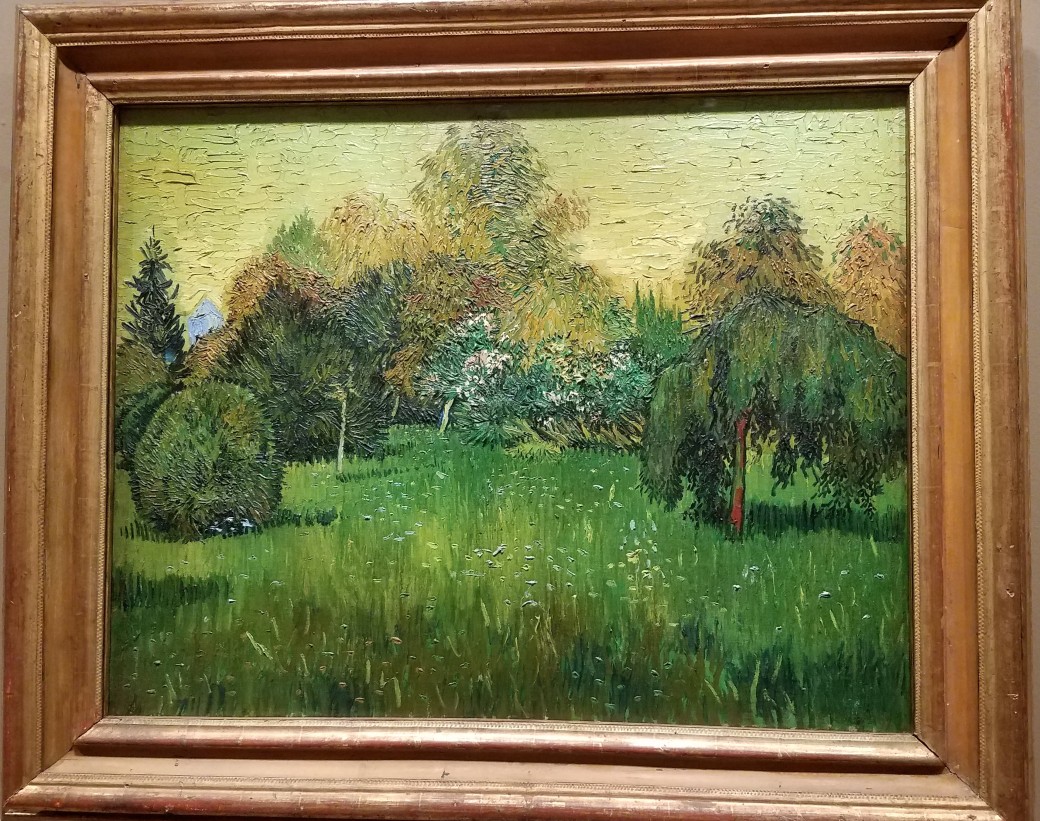 The following painting, The Drinkers, was painted while Van Gogh was at Saint-Paul-de-Mausole asylum in Saint-Rémy-de-Provence, France. Although he was very productive at this time, he struggled with self-confidence as an artist. to retrain himself, he made copies of admired works of other painters, which freed him from having to come up with original subjects, but also allowed him to concentrate on interpretation. The Drinkers was inspired by a black & white print by Honoré-Victorin Daumier, but the colors were his own invention.

Van Gogh painted a series of still lifes involving fruit in 1887. He simplified his palette, emphasized vibrant colors, and used thicker, broader strokes than he had previously. In these works, he experimented with complementary colors (yellow and purple, blue and orange, red and green) to intensify the vibrancy.

Paul Gauguin was an accomplished sculptor as well as painter. In 1886, Gauguin was invited by ceramist Ernest Chaplet to create artistic pottery. Instead of using pre-made forms, Gauguin designed his own, which he jokingly called his “monstrosities.” This vase is decorated with both exotic and familiar motifs, including a goose taken from his paintings of Brittany and a Cambodian deity based on a photograph of a sculpture near Angkor Wat.

Gauguin is famous for the paintings he made of life in Tahiti. His second trip there began in 1895. Over the next couple of years, he painted some impressive canvases that were larger than his former works. No te aha oe riri is based on an earlier painting, but the mood has changed, in that the figures are more disengaged. Although difficult to interpret, the question of the title invites the viewer to create his/her own narrative>

Gauguin was keen to capture the flora and fauna of Tahiti. In Te raau rahi (The Big Tree), the big tree of the title is on the left.  In the middle is a tropical almond tree behind a group of banana leaves. On the right is a hibiscus bush with red flowers.

At the Moulin Rouge is Toulouse-Lautrec’s most famous painting. He painted this scene of the Paris dance hall populated with regulars and habitues, including himself – the short figure in the background, accompanied by his cousin, the physician Gabriel Tapié de Céyleran, who is much taller. The woman on the right is the “scandalous” English singer, May Milton. At some point, the painting was cut to remove her from the scene, either by the artist or his dealer, but by 1914, it had been reattached to the painting.  If you look carefully, you can see on the lower right side, two faint perpendicular lines where the painting was cut.

With this painting of the dance salon Moulin de la Galette, Toulouse-Lautrec became famous for depicting the entertainments and people of Montmartre. He used turpentine to thin his paint, applying it in loose washes. This technique is called peinture a l’essence.

A painting by Cézanne, The Vase of Tulips, was included in an earlier “FOTD (Flower of the Day)” post.

To accompany this post, I am posting a YouTube video of French composer Claude Debussy, Claire de lune. Claude Debussy (1862-1918) and Maurice Ravel were known as the Impressionist Composers, who lived in the same time period as the painters Van Gogh, Gauguin, Cézanne and Toulouse-Lautrec.