Cee’s Black & White Photo Challenge this week is things that are long. 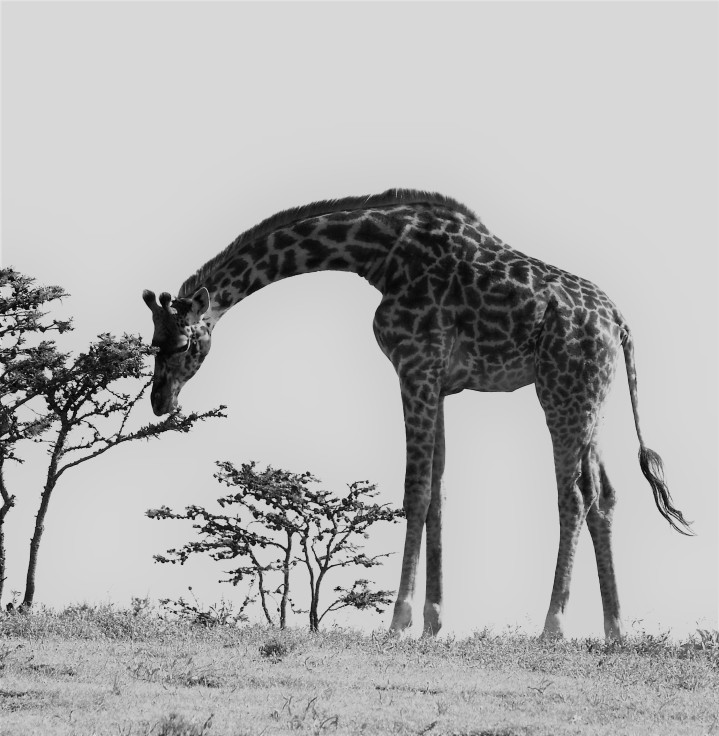 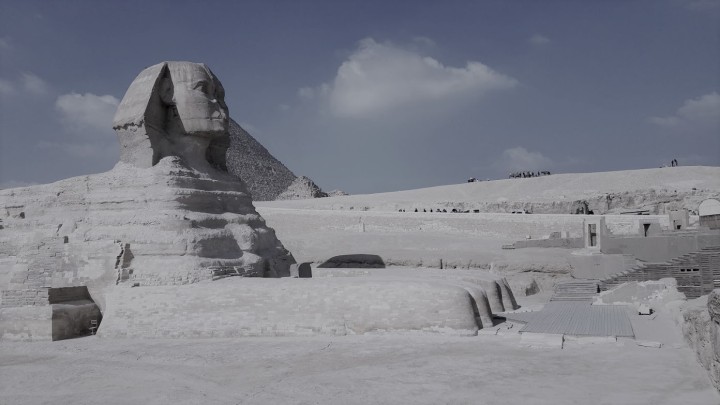 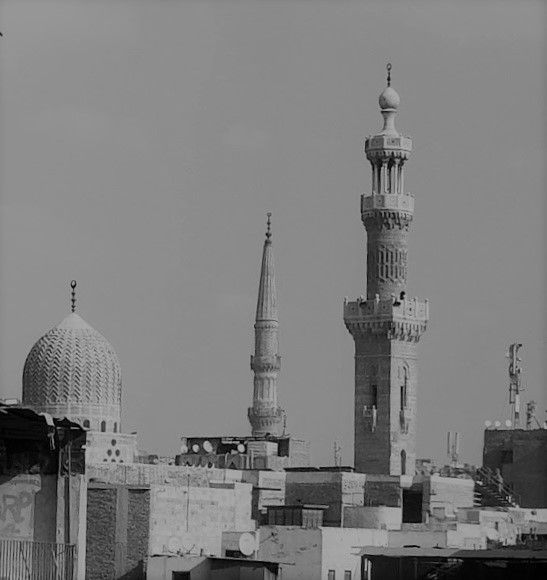 Tall obelisks (they were long before they were hoisted into position 😉 )

Very long building! (and this is only a partial view!)

Guest host Shower of Blessings has given us the theme for Lens-Artists Photo Challenge #87: Reflections.

My car is a source of several types of reflections:

Reflections of holiday lights on its hood

Light from its headlights reflecting on snowfall 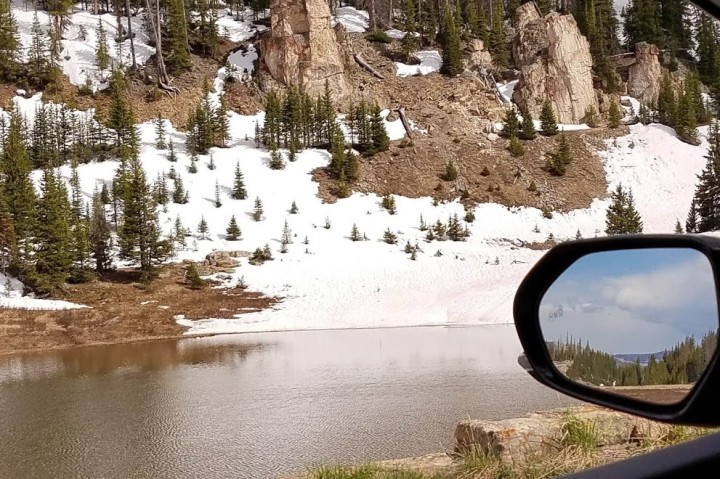 Bodies of water are also great sources for photographing reflections:

One of the ponds at our senior community – the reflection was clearer on the water side (left) than the ice side (right).

Egrets on the edge of a lake (Tarangire National Park, Tanzania)

In this close-up of two geese that are part of a sculpture, the reflection of the top of the sculpture, geese in flight, can be seen in the pond. (Chicago Botanic Gardens) 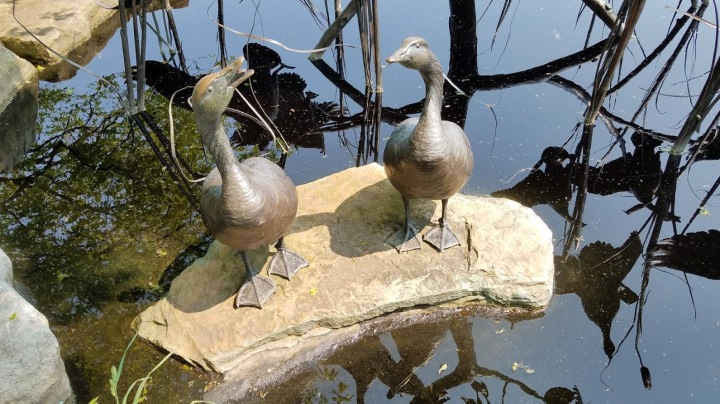 Polished surfaces, such as glass and mirrors, are good places to look for reflections.

Glass pots on display at the Museum of Glass in Tacoma, Washington – the pattern at the bottom of the pot on the left is reflected on the platform. 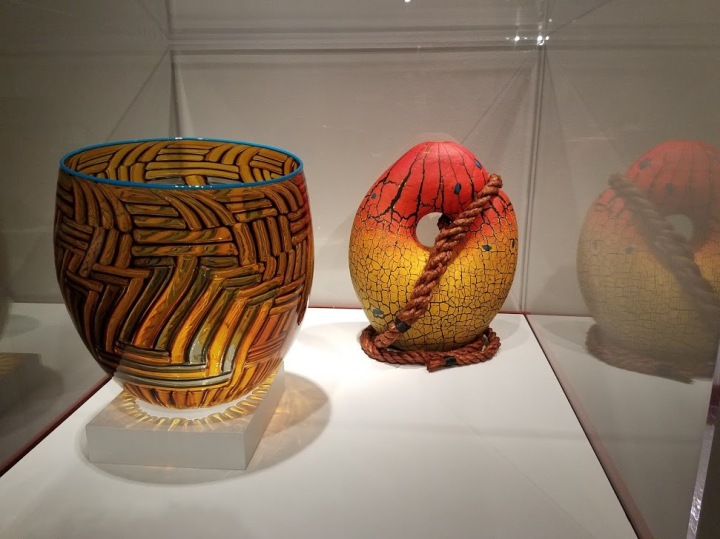 Glass sculpture on the roof of the museum after a rainfall – the birds are actually reflected in the puddle – it reminded me of the egrets in Tanzania!

The polished floor in the courtyard of a mosque in Cairo, Egypt

It took me awhile looking at this photo to realize it was actually a mirror image I was photographing, at a restaurant in Cairo. There was also a mirror at the far end, where the actual scene of our group having dinner was reflected, in the second photo. 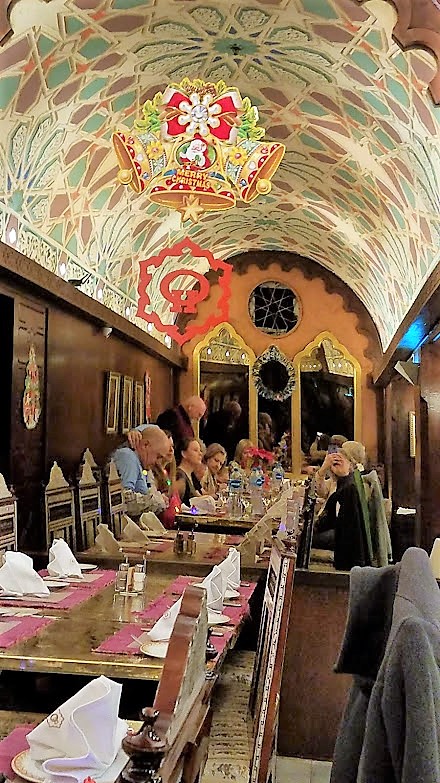 Finally, semi-spherical mirrors were used to enhance flower exhibits at the annual orchid show (Chicago Botanic Gardens). This photo is a bit blurry but I liked the reflection – and you can see my camera in my hand at left!

And now, a theme-related video of a golden oldie from the 1960s!

Frank Jansen at Dutch Goes the Photo has selected worship as his photo challenge theme for Holy Week. I share the sadness of the world for the devastating fire at Notre-Dame de Paris. But there are many holy places around the world that inspire awe where people worship.
Below are photos of worship from Judaism, Islam, Christianity, and the ancient Egyptian religion.

The ancient Egyptians had a pantheon of gods that they worshipped, and many of their temples contain images of pharaohs and others worshipping the gods.

Debbie S. at Travel With Intent has a challenge called One Word Sunday. This week the word is vertical.

You know spring is coming when you see vertical shoots emerging from the ground in your garden! Des Plaines, Illinois, USA

Vertical columns at the ruins of Caesarea, Israel

Cee’s Fun Foto Challenge theme this week is shiny.  Using photographic manipulation and mistakes added to the shiny-ness of some of these photos!

Icicles – I got the effect I was looking for in this shot, with the late afternoon sun shining behind the icicles to create a golden glow. (Taken from my living room window) 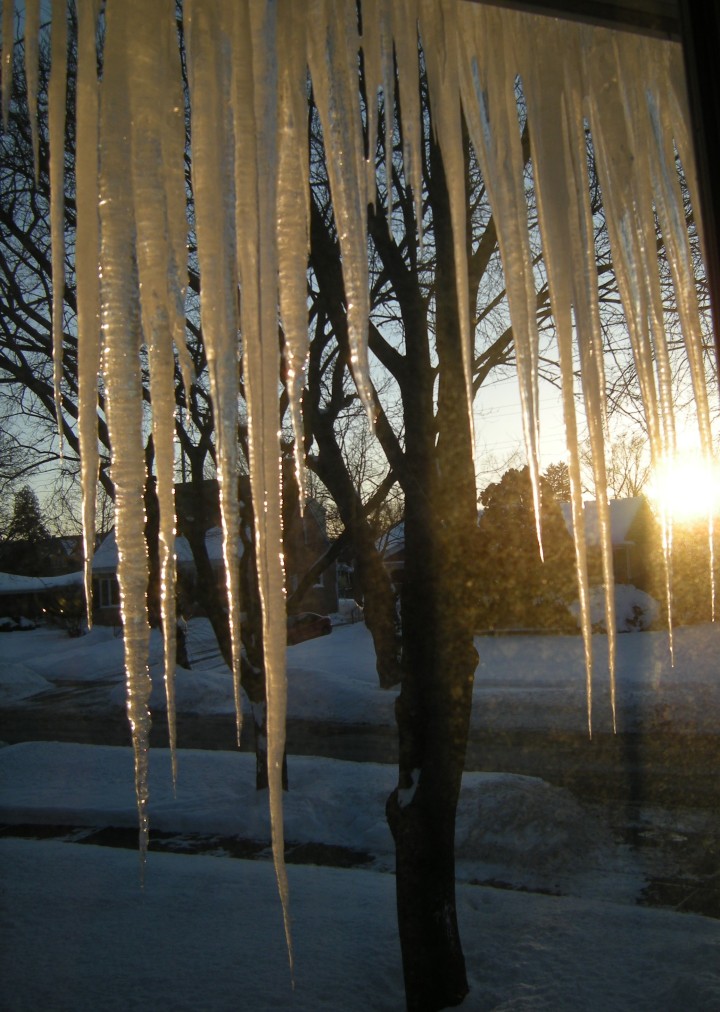 The full moon rising in the darkness plus the bright holiday lights on people’s balconies brought out the contrast between dark and light. Using my cellphone camera made the moon look larger and shinier than it actually was. (Taken across the street from my church in Des Plaines)

I cropped this shot to focus on the shiny golden table surface with the reflection of a shiny wine glass. (Restaurant in Cairo, Egypt) 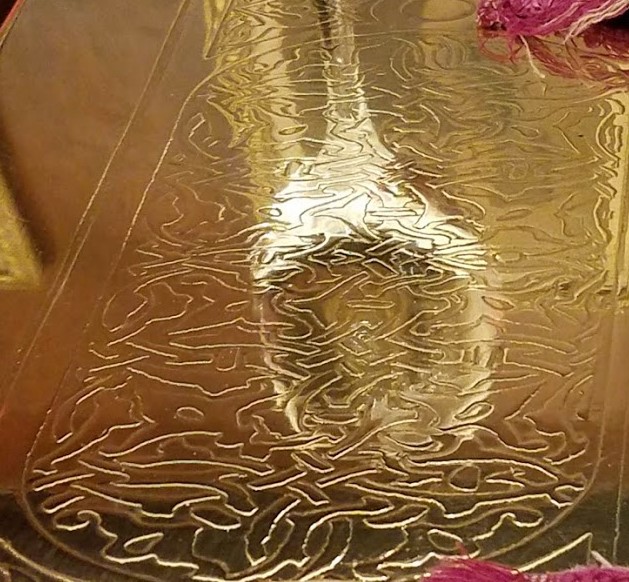 This photo needed no modification – the shiny white marble floor of this mosque reflected the architecture around it, creating an awe-inspiring effect. (Al-Azhar Mosque, Cairo, Egypt)

The Dome of the Rock in Jerusalem, Israel is easy to spot with its shiny golden dome standing out against the shades of white of the old city. I enhanced the contrast to emphasize this magnificent building.

This photo was an accident – I had my camera on the wrong setting so this photo of sailboats on the Mediterranean Sea (at Cesarea, Israel) was overexposed. But I liked the effect and the shiny surface of the Mediterranean casts a white glow on the scene. (I also discovered I needed to clean my lens!)

The day following this, we drove along the coast of the Dead Sea by motorcoach on our way to Masada. It was still relatively early, so the rising sun made a shiny reflection on the surface of the Dead Sea, our first view of it.  Once again, my cellphone’s sensitivity to bright light made the sun bigger and brighter than it was.

For Cee’s Fun Foto Challenge: Patterns, I am going multicultural!

November 2018: At a Chicago Sinfonietta concert celebrating the Indian festival of Diwali,  during the intermission, audience members (especially children) made their own Diwali patterns using glue and glitter on preprinted patterns. Here are two of my favorites.

At a Christian church on Christmas Day, we visited a Coptic church known as the “Hanging Church” where there were many examples of Arabic influence in the décor inside the church. 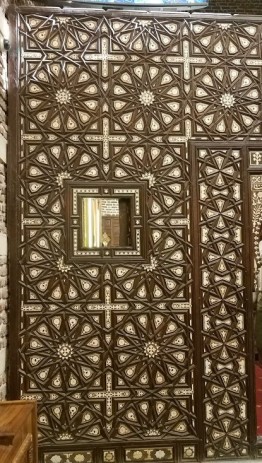 January 2019: We visited the Church of all Nations in Jerusalem, Israel, next to the Garden of Gethsemane:
Floor tile patterns 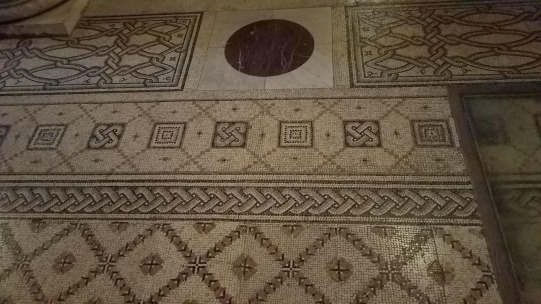 Decorative gate in front of the church

In Old Jerusalem, we went to Temple Mount where the famous golden Dome of the Rock is located. The outside of this building is decorated with beautiful mosaic patterns in a style typical of Islamic art:

January 26, 2019: Back home again, our daughter got married at an interesting, eclectic venue (normally used as a photography studio) in which there are several one-person bathrooms, each decorated differently. My favorite was the one decorated with a Frida Kahlo theme. Here are some of the colorful Mexican style tiles on the floor: 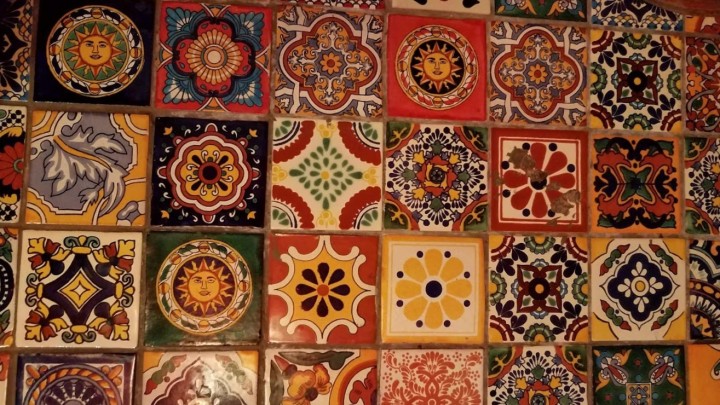 I hope you have enjoyed these patterns from around the world!

For more about Al-Azhar Mosque in Cairo, Egypt, see Journey to Egypt: Part 4 – Visiting a Mosque and Celebrating Christmas in Cairo.

For Israel locations, I will be blogging about them soon!

Another cool day.  Eliane drove us to the Feira do Largo da Ordem downtown – Carlos didn’t go with us because he hates crowds.

And crowded it was! This feira is a crafts market which takes place every Sunday from 9 am to 2 pm, with well-made craft items, some beautiful, cute or clever.  It is located in the center of the Historic District next to the Presbyterian Church and Tiradentes Square. According to its web site, an average of 15,000 people visit the fair every  Sunday. Sometimes there are expositions of antique cars and the fair is very convenient to having lunch at one of the surrounding restaurants.  Besides craft items including hand made jewelry, paintings, items for the home and novelties, there are also antiques and old books and magazines for sale.  My husband and I both bought t-shirts, and I also bought a tote bag with an araucária (Paraná pine tree) imprinted on it. 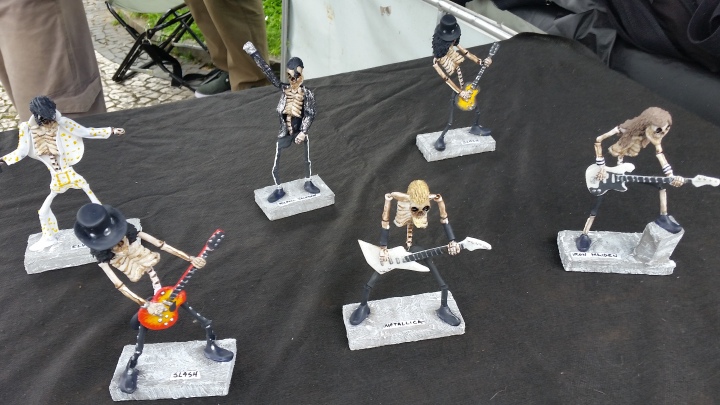 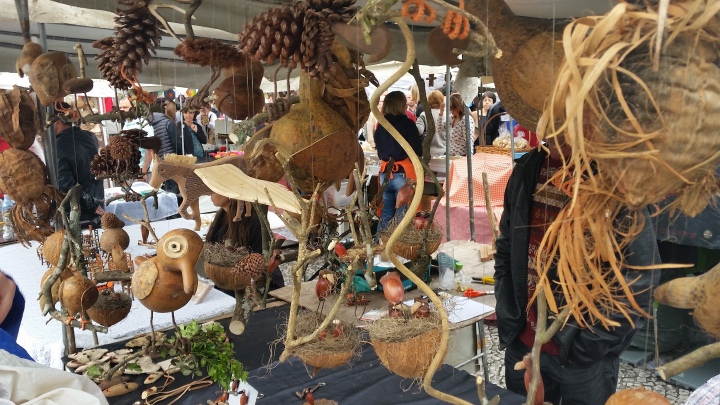 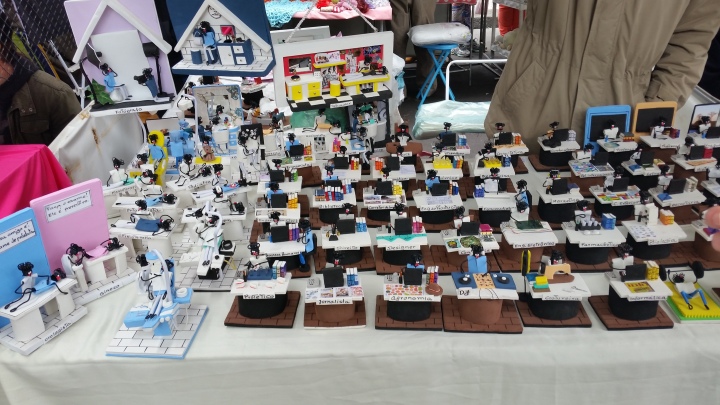 Free samples of cube-shaped gummy candies were being offered at one booth – I liked them because they were soft but don’t stick to your teeth.  We sampled many different flavors but in the end I bought only two small packages of cachaça-flavored gummies, which will make unique souvenirs.  I also bought a small jar of mango-passion fruit jam, not too sweet.

Meanwhile, my husband Dale (who took most of these pictures) noticed the towers of a mosque behind the booths and went to investigate. He photographed the mosque which was just behind the fair – I don’t know why we hadn’t noticed it when we were in this same area the day before! 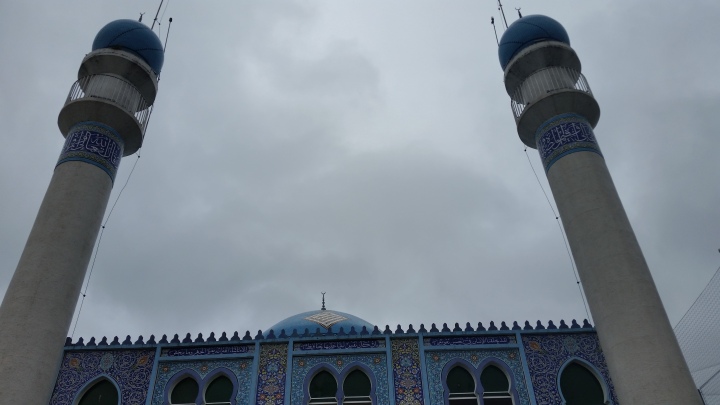 The mosque, too, was crowded!

As we were leaving, we passed a booth selling items made of metal and…

…a guy selling little insect-like wire things that you press down on to make them jump.  I smiled, thinking they were clever, and wish I’d bought a couple for my cat!

Hi honey, I am home

creating order out of chaos, and vice versa